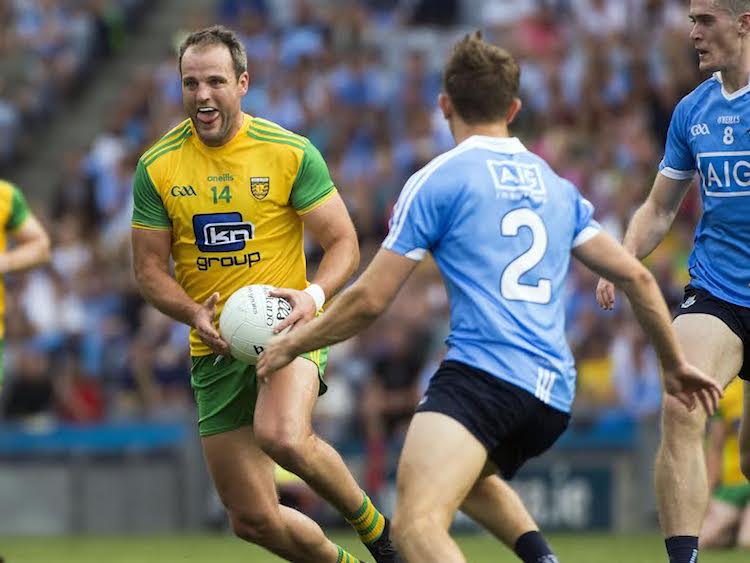 From the lion’s den of Croke Park to the bear pit of Dr Hyde Park, onwards Declan Bonner rolls with Donegal.

There’s little time for dwelling on a 2-15 to 0-16 defeat to Dublin at Croke Park last night as they look to get their All-Ireland semi-final bid back on track.

Their next assignment takes them to the Hyde, home of a Roscommon side who were annihilated by 18 points by Tyrone in last evening’s curtain-raiser in the capital. Tyrone put 4-24 past the Rossies, who host Donegal in what is now a must-win tie for both of them.

“We have to go to Hyde Park and win,” nodded Bonner.

“We have a job to do there next week and we’ll take the positives from this huge learning curve. Hopefully this will move them onto the next level.

“It’s a balancing act. You have to look at guys who played who will need recovery and other guys will need to get a bit of work done.

“Preparation starts when we get back to Donegal. The laptops will be out analysing the game. It’s a huge game next week.”

Donegal seemed to pine for Patrick McBrearty as Dublin stayed an arm’s length away from them.

McBrearty, who has begun his recovery from a cruciate injury, will be on the absent list until next summer and Donegal are down one of the summer’s big stars.

Bonner said:  “We won’t have Patrick for nine months. He’s a huge loss because he’s a top forward; one of the best in the game. He’s always capable of six or seven points. Who knows? We have what we have and the lads put in a big shift.”

Stephen Cluxton’s return to the Dublin XV helped give them a real platform. Cluxton was described this week by former Donegal manager Jim McGuinness as the best goalkeeper in GAA history.

While Donegal won only 15 of Shaun Patton’s 25 re-starts, Dublin took possession from all bar two of Cluxton’s 25 kick-outs.

Bonner said: “Dublin squeezed the kick-outs. It was a big learning curve for Shaun. He had a really good Ulster and he’s in his first year at this level.

“He was outstanding in Ulster and we knew Dublin would force the issue. That was a huge factor in the game. Getting hand on ball was crucial and they won the kick-out battle hands down.”

Donegal lost by five points and while they battled for the duration, there was no air of satisfaction from Bonner as he spoke in the aftermath.

The Donegal manager said: “It was probably Dublin’s first real test. They have won their matches out of sight in Leinster. We probably provided a different challenge.

“I wouldn’t be happy with our performance to be quite honest. We didn’t get to the levels. We still kicked 16 scores and could have had a couple of goal opportunities. We had to take those to be there at the finish.”