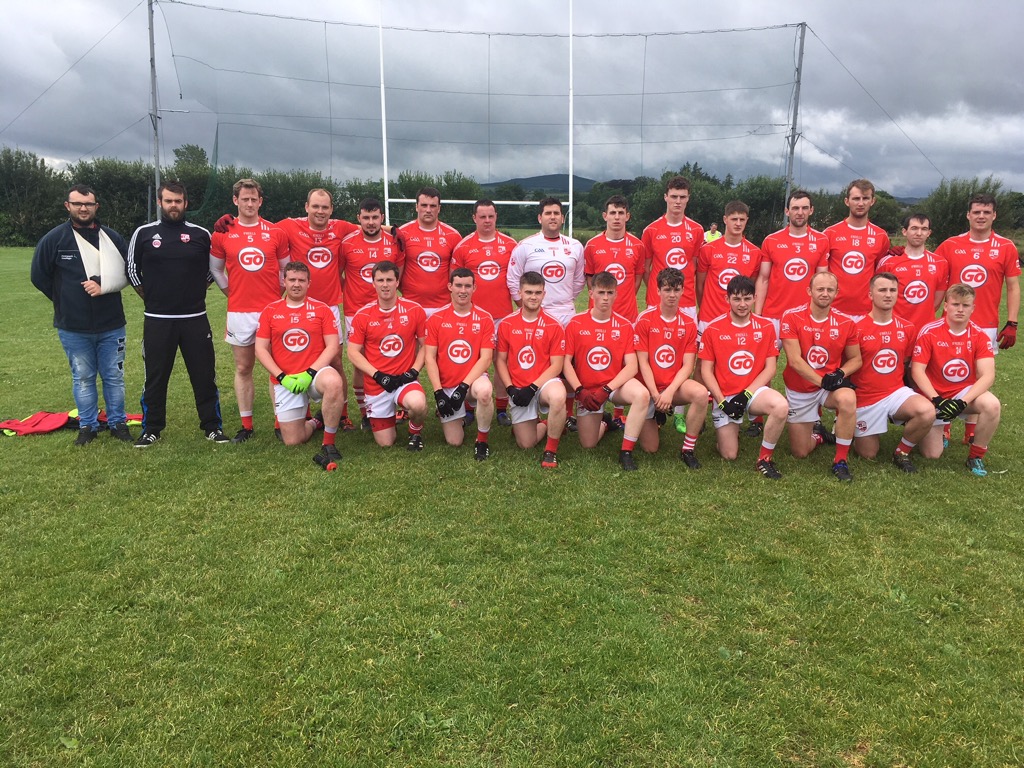 NAOMH Colmcille 1-13      V 0-11 URRIS.                                                                                                               Despite falling four points behind in the opening seventeen minutes of the first-half and then three points behind again after eight minutes of the second-half Naomh Colmcille showed their renowned fighting qualities to score 1-06 in the final twenty minutes of this game to take the points which draws them level with their opponents in the league table with a game in hand and more importantly their destiny in terms of promotion now in their own hands. Charlie Collins reports from Pairc Colmcille in Newtowncunningham. Urris started well and raced to a four point lead with scores from Mark McLaughlin , Paddy Doherty, Conor Bradley , and Ryan Doherty. The visitors were much the better team and should have been further ahead as the home team struggled to get a foothold in the game. Matthew Crossan’s point in the 18th minute got them going and was quickly followed by scores from Willie Gillespie , Oran Hilley , and Gillespie again to leave the teams level in the 24th minute. Kieran Friel’s 45 restored Urris lead but P J McBrearty and Ryan McElrean scores saw Naomh Colmcille lead for the first time in the game. Peter Devlin’s fine score left the teams level 0-06 apiece at the break and Urris must have been wondering how they were not ahead after controlling things for so long in that opening period. Willie Gillespie who finished with a tally of six points opened the second-half scoring but back came Urris with another run of four points in a row. Mark McLaughlin scored a couple of crackers to put them back in the lead and then after the home team had lost Alex Devenney to a black-card, Conor Bradley converted two frees to make it a three point game in favour of Urris, 0-07 to 0-10 in the 38th minute. Unfortunately for Urris they wouldn’t score again until the 60th minute as Naomh Colmcille took control with a run of scores including the game’s only goal. Ryan McElrean , Oran Hilley and two more from Willie Gillespie had Naomh Colmcille back in front 0-11 to 0-10 in the 46th minute. It was still there to be win or lost and up stepped the newly married Ryan McElrean with the game’s big score when he fetched Eddie Gillespie’s punt forward, rounded two defenders and drilled a cracking low shot past Kieran Frto make it a four point lead with eight minutes remaining. Urris fought back and had a goal chance themselves when big Dean Kelly won a high ball, passed to Paddy Doherty but he blasted wide when well placed in the 55th minute. Willie Gillespie produced a super solo point after his team had held possession for a long time and it was game over. Conor Bradley’s point was Urris first for 22 minutes , the period that this game went away from them , but Naomh Colmcille had the final say with P J McBrearty ‘s second point of the game to make the final score 1-13 to 0-11? This result leaves these two teams on 16 points but Naomh Colmcille have a game in hand and they would appear to have the easier run-in with two games against Carndonagh and a trip to bottom team Pettigo , while Urris have a home game with Letterkenny Gaels and a tough trip to already promoted table-toppers and unbeaten Downings. However, nothing is ever certain in sport and there could be more twists and turns before the final positions in Division Four are decided. NAOMH COLMCILLE ; John Roulstone, Jason Fitzpatrick, Alex Devenney , Paul Friel,Ciaran Devine , William Lynch , Oran Hilley ( 0-02 ), Eddie Gillespie, John Fullerton, P J McBrearty ( 0-02), Ryan Mc Elrean (1-02 ), Hugh O Donnell , Matthew Crossan ( 0-01 ), Willie Gillespie ( 0-06 3f), Joe Donaghey. SUBS ; Kevin Gallagher for Devenney ( 35mins b/c ), Conor Grant for Crossan ( 40mins), Keenan Diver for O’Donnell ( 50mins ), Mark Friel for Hilley ( 58mins ), Stephen Gallagher for Gillespie ( 60mins ).                                                  URRIS ; Kieran Friel ( 0-01/45 ), Brendan Doherty , James Griffen, Luke Mullins Gary Doherty , Conor Bradley ( 0-04 3f ), Micky Grant, Dean Kelly , John Mc Carron, Paddy Doherty ( 0-01), Micky Grant ,Ryan Doherty ( 0-01 ), Mark Mc Laughlin ( 0-03 ), Oisín Hession , Peter Devlin ( 0-01 ). SUBS ; Luke Devlin for McLaughlin ( 47mins ), Barney Friel for Brendan Doherty ( 55mins ). REFEREE : Enda Mc Feely ( Convoy ).