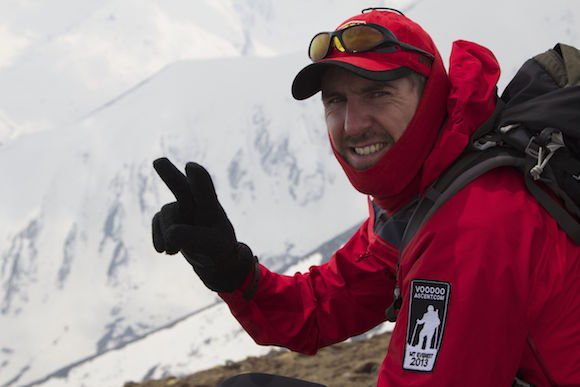 Jason Black to make summit push up K2 this Wednesday

Donegal mountaineer Jason Black will this Wednesday take his life in his hands when he makes the summit push up K2.

The Letterkenny man hopes to become the first Irishman to return from scaling the world’s second highest mountain which is known by climbers as The Savage.

There have only ever been 320 successful summits of the mountain, putting Black’s challenge into real perspective.

All going according to the plan then the Donegal man will summit the mountain around July 22nd with as big a challenge facing him as he makes the return journey down K2.

In this special message to Donegal Daily readers, Black took time out to thank all those who have sent him messages of support and for not asking the obvious question – “why?”

“It’s pretty tough going just surviving this at the moment – k2 has no mercy and any weakness physically or mentally, K2 will sniff you out in a single heartbeat.

“It’s unlike any other sports I’ve played, put your hand up and someone can help or step in, simply step off my bike or stop running or get substituted in a game .. up here it’s at a whole different level it’s down to you there’s no safety net to catch you.

“That life honed skill as a Cub Scout grown & harvested as a developing youth combined with a life-long fitness programme and a deep self-belief it all you have to stay alive.

“I’m now 24 days on Expedition on K2 sleeping under the stars on the Baltoro active glacier at the base of K2 with a ground temp of -30 that at times shivers through my spine hips and shoulder blades, using only my per bottle to keep me warm.

“The upside is with clear skies it’s an environment that you really get to listen to yourself and find that inner voice of really living life to its full, surrounding yourself with the most incredibly positive people passionate in the pursuits of living it to the max avoiding floating along as a passenger instead being the driver, removed from a very different world.

“Personally, I’m feeling very very strong and acclimatising to the lack of oxygen and atmospheric pressure well, climbing up to 22,500 ft in one swoop, that’s approximately ten times the height of Mt Errigal back home but at high altitude and 50% less oxygen.

“Putting in camps up high on K2 are extremely difficult times cutting into a 40% grade with a simple slip sends you tumbling you thousands of feet below. Sadly that was the case last week as a fellow mountaineer, Serge, a French Canadian fell up ahead of me passing by just meters to my right.. losing his life below.

“That was a serious reminder of why K2 appropriately named the savage mountain earned its world famous reputation. The stats on the mountain are breathtaking with only 320 successful summits in its history. And when you imagine only the elite mountaineers take on this mammoth challenge, it makes it the ultimate prize in endurance sports for some just to survive.

“No Irishman has ever summitted K2 and survived and there lays the ultimate goal. It’s going to take every fibre in my body, it’s going to call on every skill learned and it’s finally going to call on a deeper inner belief that I’ve ever hard to call on before to survive this monster of a mountain.

“It’s so humbling as an Irish/Donegal man to be in a position to have a real chance of success and with a lot of luck and the prayers and support back home and a deep spiritual belief in my greatest Sherpa “Jesus Christ” who I place my life in his hands daily, to guide me safely to the summit and home to wonderful family and Irish community.

“I will be starting my summit push on 18th July and hoping to reach the summit on the 22nd July where hopefully I will make a personal dispatch satellite phone call to the people of Ireland, remembering at all times I’m only half-way there.. and getting downs equally if more the greater challenge.

“Thank you so much to everyone for the positive messages, for not judging me with that stupid question WHY, instead celebrating WHY NOT?

“Finally to the young people in my country “never be afraid of being first, be proud to set your goals, roll back your shoulders, walk in your own shoes in life and at all times be humble, respectful and be filled with a pride that you are unstoppable in this incredible once-off life…… be inspirational.”