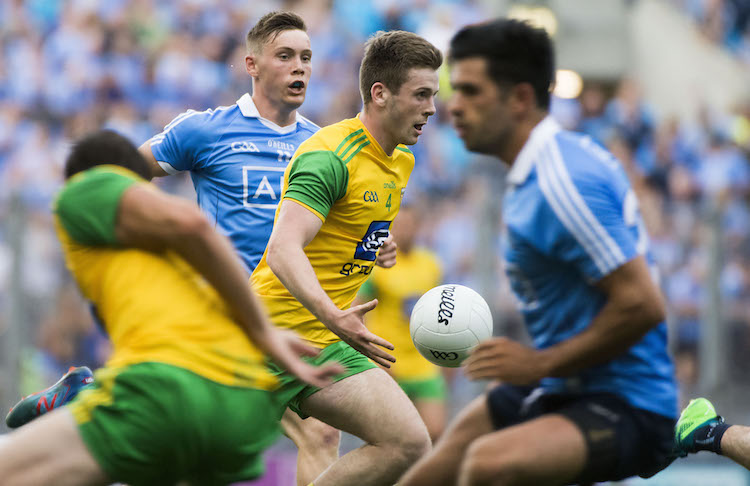 Dublin manager Jim Gavin is expecting a ‘warm welcome’ in Omagh on Saturday night after the All-Ireland champions’ win over Donegal.

Two Niall Scully goals were the difference for the Dubs in a 2-15 to 0-16 win over Donegal on the first evening of the ‘Super 8s’.

Tyrone walloped Roscommon in the curtain raiser and Gavin, looking out from beneath the peak of his baseball cap and answering our questions only because he had to, gave off the demeanour of a man who would rather be in shark-infested waters that the Hogan Stand’s media room.

“We have some food for thought,” Gavin said as he began the gaze towards Omagh and what he expects will be a red-hot evening at Healy Park.

“It’s a fantastic game and a fantastic opportunity. We have always got a really warm welcome from the Tyrone people and the games have been really competitive. We’ll expect nothing less.

“We met this time last year. Tyrone were disappointed with their performance and they’ll look to right that next Saturday. They’re putting up big scores now. It’ll be a cracking game.”

Dublin broke Donegal’s resistance on a strange sort of evening on the Jones’ Road.

A little over 50,000 turn up, but the big Cathedral’s vast swathes of empty seats gave a sometimes eery feeling around the old place. To such an extent you could hear the players shout up in the upper tiers of the Hogan.

Gavin’s side are nailed-on favourites to reach the last four in the Championship and you get the sense that he would have rammed home a hard message to his players after this one.

“We had chances that we didn’t convert and that’s disappointing,” he said.

“Particularly when we spend most of our practice sessions going after the skills of the game, our shooting and our scoring. That won’t be good enough the next day against Tyrone.

“They’ve put up 7-44 in two games so we will need more scores the next day. It won’t be good enough in Omagh. It was just about good enough today.”

Gavin, though, felt his side was ‘in control’ of the contest and reserved praise for Donegal, who he considers ‘a class team’.

He said: “There were two kicks in it at the end. That’s a reflection of them and their determination. They have a lot to say in this competition yet.

“It was a great test. You can see why Donegal are Ulster champions. They’re a quality side.

“If they’d took a couple of more scoring opportunities, it could have been a different game going down the stretch. We’re satisfied and happy that we have two points and that gives us a foundation in the group.”