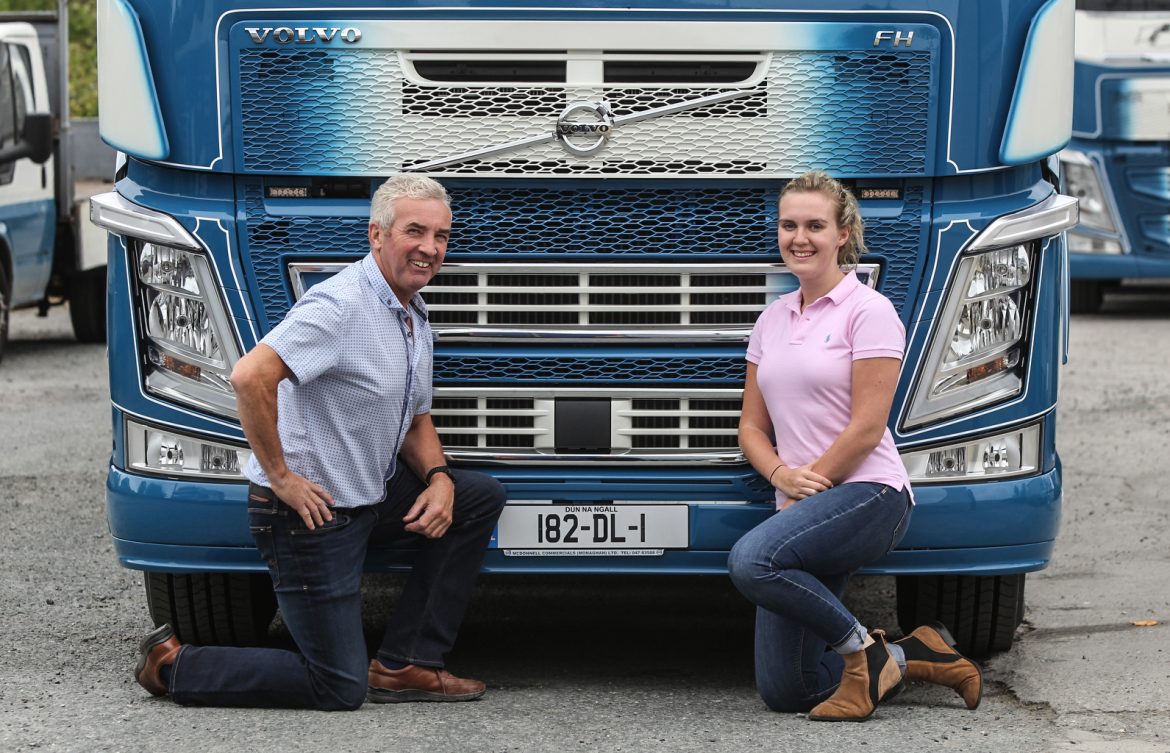 This week our Motoring Columnist Brian McDaid heads to Raphoe to meet with Terrence Quinn, the proud owner of Donegal’s first 182-Reg vehicle:

The car showrooms all over Donegal were busy at the start of July as the first part of 2018 car number plates make way for 182. Every so often you’d spot a new motor on the roads of Donegal proudly displaying the second part of its annual registration but this year’s number one registration has gone to the commercial sector.

There was a yarn once told about Mc Donald’s farm down in Burt. They had so many tractors and combine harvesters in it that they had a number plate registration all of its own. It was E.I.E.I.O. !

It was also a man named Mc Donnell who ended up with a very special numberplate in Donegal this year but he was from Co. Monaghan. The unique registration 182 DL 1 wasn’t for a tractor or a combine harvester, but was for something that would be bigger than both. 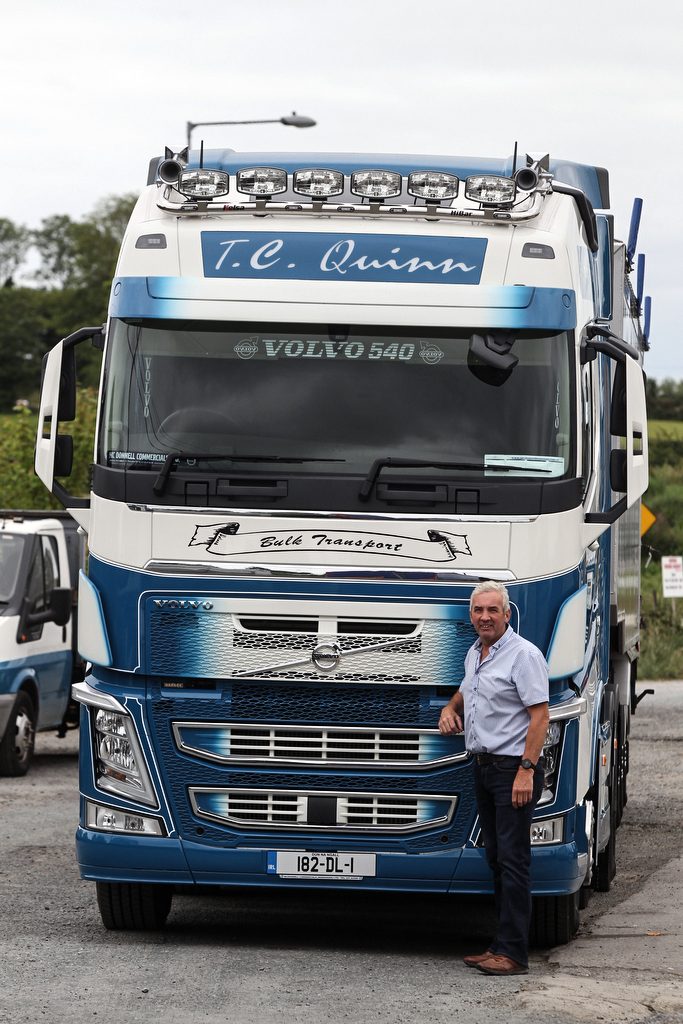 Terence Quinn with his new Volvo 540 with the number 1 registration of 182 in Co. Donegal. Photo Brian McDaid

Mc Donnell is one of the main Volvo dealers for this part of Southern Ireland based in Co. Monaghan. They got the Number 1 number plate for the second part of 2018 for one of their customers in Donegal, a local haulier, Terence Quinn from Raphoe.

That number “181 DL 1” now sits proudly on Terrence Quinn’s latest addition to his fleet of trucks all of which are Volvos. 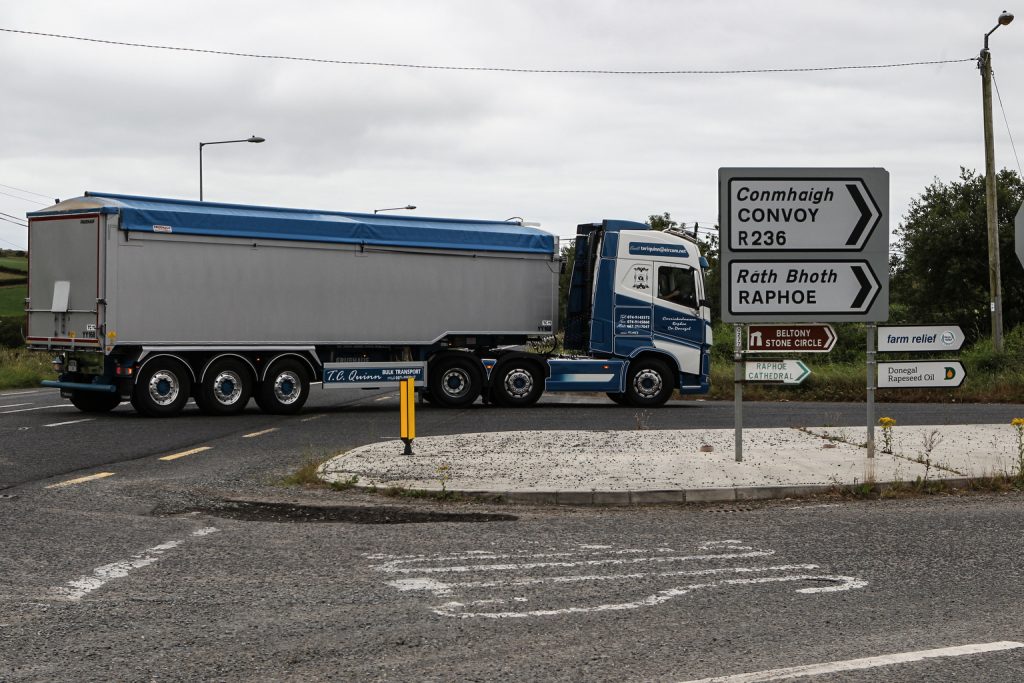 All of Terence Quinn’s fleet are unmistakable on the road. Finished in Air Force Blue or Fiat Blue over white. His trucks will draw 30 tonnes of cargo on a good day and will average just 6 mpg. His fleet of trucks are well turned out, but the Raphoe man remembers when he started the haulage business in the humblest of ways.

Forty years ago, that’s if you include the years before Terence Quinn was able to drive a truck. Terence started his transport business working in Raphoe delivering bundles of peat briquettes door to door with a hand cart. 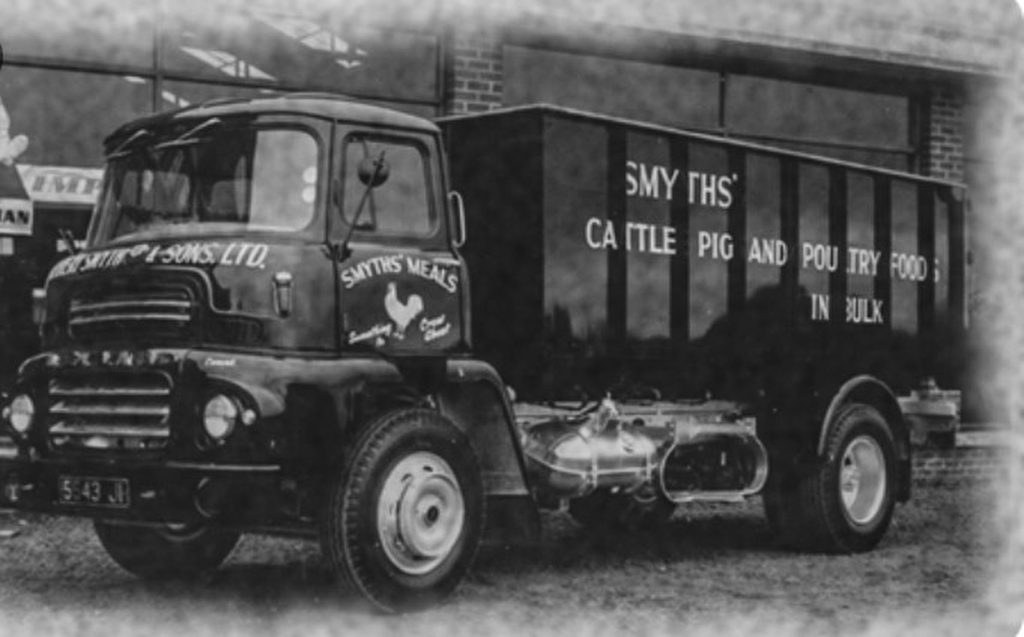 An old Leyland Comet not unlike the one that Terence Quinn’s late father Tom drove drawing animal feed.

As his business increased door to door in Raphoe, Terrence even bought a donkey and cart long before he could drive as orders increased around his home town.

He still gets a bit of business working with household fuel but now it’s on a slightly bigger scale.

Looking over at a lorry arriving in the yard, Terence apologised for the condition of one of his rigs covered in the black coal dust. The ten year old Volvo just return from Lisahally Docks in Derry where it spent the week as part of a team of articulated trucks which unloaded a coal boat of cargo of hundreds of tonnes on household fuel.

Transport is in Terence’s Quinn’s blood, his late father Tom was also in the haulier business contracted in to drawing animal feed for the local Mills. Terence can still remember the old Leyland Comet he drove BIH 711.

Those old trucks had no comforts for drivers like power steering and even though they could carry a lot less than the trucks of today The work was a lot more manual trying to negotiated the narrow lanes of Donegal farm yards, double clutching the straight cut gearboxes.

Terence drives the same roads that his father did before him and works for the same people one or two generations on, and his business serves the same customers as well. Terence’s brother Martin also drives for the family business as does Terence’s nephew Mark Bonner from Convoy. Mark also has a keen interest in the detailing or the finishing of the fleet.

Terence’s wife Tina originally from Letterkenny works on the administration in the family business as does their daughter Melissa who just joined the staff in the office in the last few weeks after she completed college. Melissa has not ventured behind the wheel of one of the big rigs yet but will do the steering of the business from the administration side. 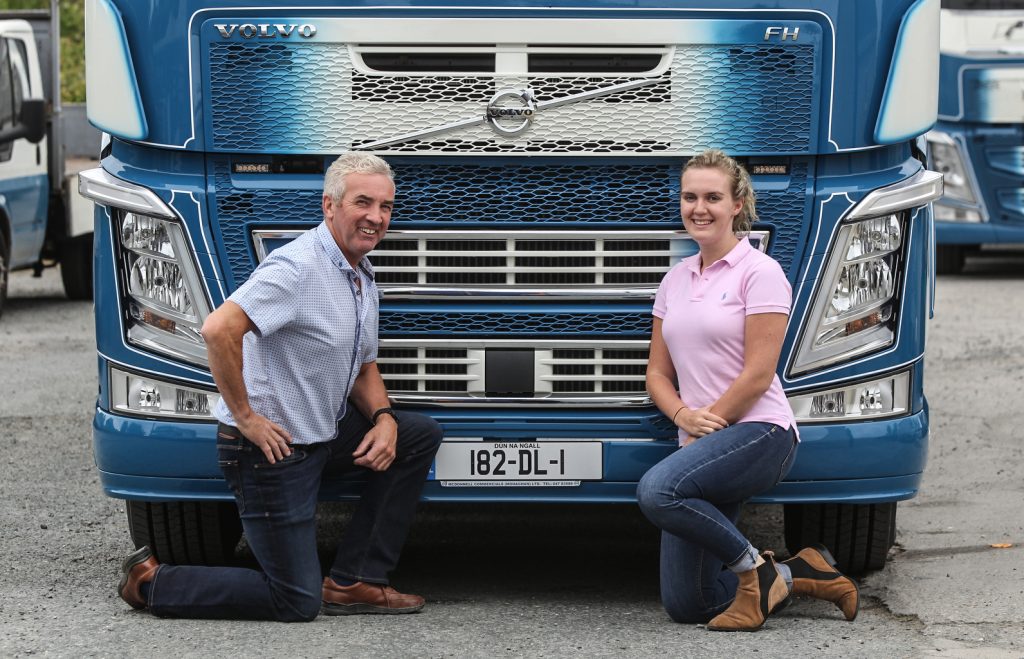 Terence Quinn pictured with his daughter Melissa who starting working in the family business this year. They are pictured at the newest lorry in the fleet a Volvo 540 FH4. Photo Brian McDaid

A brand new 182 DL plate on the street might suggest Terence has his money made but the reality it’s just a reinvestment in the business, Terence’s trucks rack up around 120,000 kms annually. They need to be on the button all the time and ready to roll at the drop of a phone call.

This latest 540 brake horsepower Volvo FH4 will be drawing a variety of loads but most of his trailers are specially designed to haul bulk animal feeds. Terence also has a variety of tipping units which can carry any load needed to be transported.

Terence has gone the distance over the years on the road in his haulage business just as he did in the ring as a very successful boxer in his youth. The recession and soaring fuel prices puts massive stress on the haulage business. So every hour on the road needs to contribute to the business. On long hauls, “back loads” need to be secured to spread out the cost, but from a humble start with a handcart delivering Briquettes door to door in Raphoe, he went from one horse power to a fleet of well turned out haulage trucks.

But as always, Terence is thankful to his team of drivers, his family and the farming community who have supported what is now the third generation of the Quinn Family in transport in Raphoe. 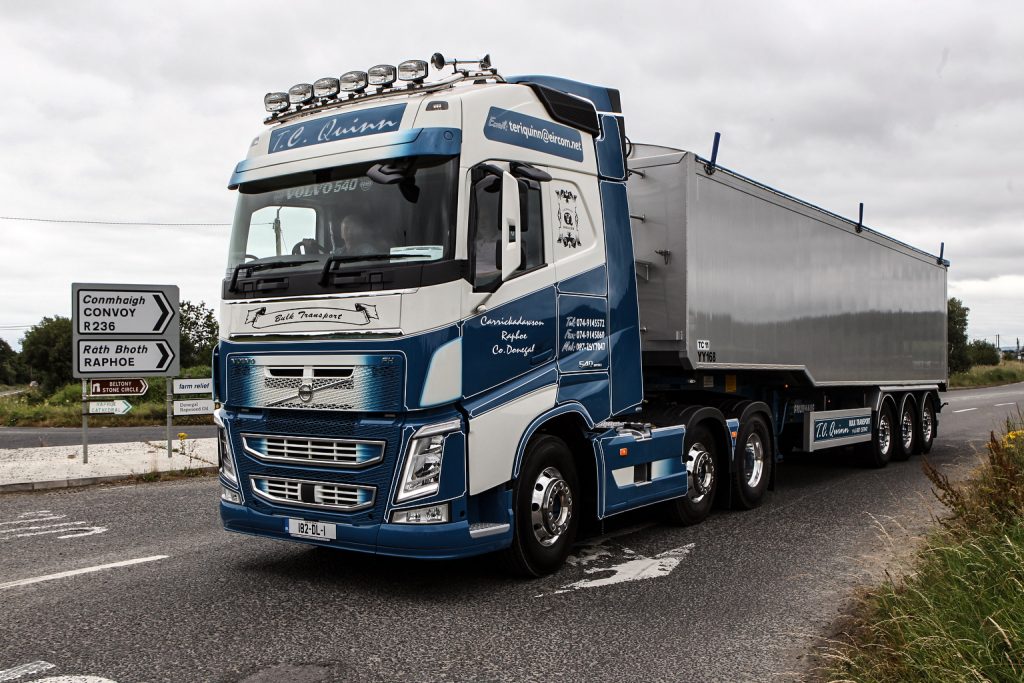 King of the road. Terence Quinn and his daughter Melissa away for spin in new lorry which is now part of the TC Quinn Fleet Photo Brian Mc Daid