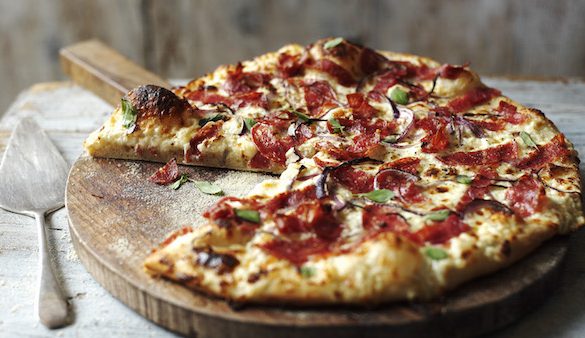 Drunk woman gave Garda a “pizza” of her mind

A woman who threw a full pizza at a Garda has been fined in court.

Amanda Murphy (26) of Oak Grove, Millfield in Buncrana admitted the offense that occurred on October 29 2017.

Buncrana District Court was told that at 3.10am gardaí were in the process of arresting a male and Murphy was present and intervening.

She was asked to get out of the way but continued and when the garda was getting into the car after arresting the man Murphy threw a full pizza at him covering his uniform and the car.

Defence solicitor Mr. Ciaran MacLochlainn said that Murphy had been out socialising with her brother and they were walking home.

A Garda car passed and the officers realized there was a warrant for the brother so they stopped to execute it.

The solicitor said that Murphy had no idea about the warrant but should have stayed out of the incident but didn’t as she was drunk.

Judge Deirdre Gearty said this was ‘absolutely appalling’ and ‘totally unacceptable’ she added ‘it is no excuse to say you were drunk and this does not justify what you were trying to do.’

She went on ‘she is the very one who would expect the gardaí to come to her if something happened to her’.

Murphy was ordered to pay €250 to the Garda Benevolent Fund and given until October 11 to do so.