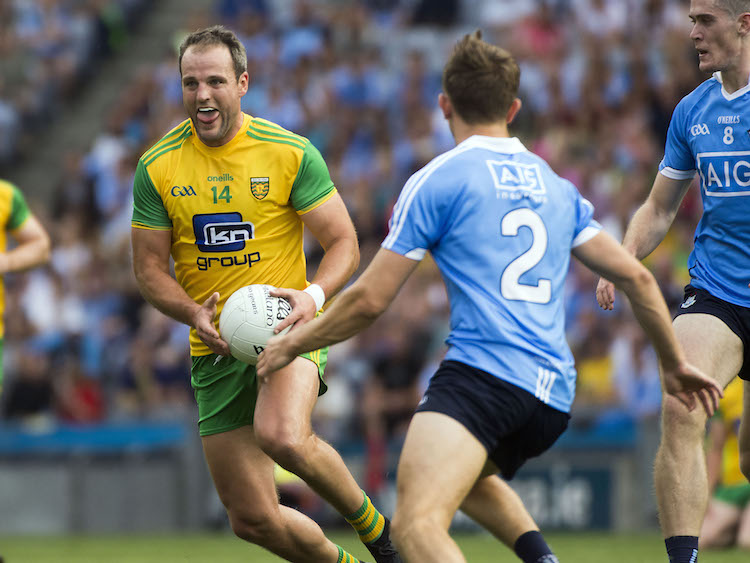 Donegal lost out to Dublin by 2-15 to 0-16 in their All-Ireland quarter-final group stage opener on Saturday night at Croke Park.

A pair of goals, one in each half, by Niall Scully, proved the difference as the Dubs – chasing a fourth All-Ireland SFC in a row – emerged with a win in their first ‘Super 8’ clash.

When Jim McGuinness was putting together the Rubik’s Cube that foiled Dublin in the 2014 All-Ireland semi-final, the then Donegal manager spent hours upon hours of studying Stephen Cluxton’s re-starts.

McGuinness could find no obvious pattern as he paused, played and paused some more the countless discs of footage he’d gleaned.

McGuinness finally came up with a blueprint and Donegal carried it to the letter as they stunned Dublin to reach the final.

Kick-outs and possession were always going to play a large part on Saturday night.

And Dublin won the battle hands down.

By contrast, Donegal took receipt of only 15 of Shaun Patton’s 25. The Dubs pushed high and forced a panicked Patton into errors a couple of times.

Dublin’s kick-outs were almost flawless at times and in two separate spells in the first half the champions won six-in-a-row.

Ordinarily, an All-Ireland quarter-final between Dublin and Donegal would surely have had the full house signs up at headquarters.

Even with a curtain-raiser between Roscommon and Tyrone as the Super 8s finally came into being, just 53,501 paid in to Croke Park on Saturday evening.

As the new format came to life, it all felt a bit strange and subdued.

On Sunday, thee were 23,000 less when 30,740 turned up for the Monaghan-Kildare and Galway-Kerry double-header.

The large swathes of empty seats meant they were days when a new era limped in rather than beating the gates down.

The old life-or-death, sink-or-swim feel of quarter-finals have gone with the round robin format. Worse, there could yet be dead rubbers on the final weekend. Good luck trying to sell those to already-sceptical patrons.

3. McBrearty absence leaves gaping hole – in attack and on the scoreboard

Patrick McBrearty’s cruciate injury arrived as a real jolt for Donegal. Their talisman, their leading marksman – who was perhaps the form player in the Championship when he picked up the horror injury in the Ulster final – was reduced to a watching brief as he begins a nine-month road to recovery.

The Kilcar man had scored 0-53 in League and Championship football in 2018 when he endured the agony.

“He’s a huge loss because he’s a top forward; one of the best in the game,” Declan Bonner said on a night when, with just five points between the teams, he was entitled to wonder what might have been had he been able to call on McBrearty.

“He’s always capable of six or seven points. Who knows?”

4. Roscommon now ‘must win’ for Donegal

The picture now is clear and the aim is simple – Donegal must win at Hyde Park against Roscommon on Saturday evening.

Roscommon shipped a heavy battering to Tyrone on Saturday evening as the Red Hands posted a whopping 4-24 and won by 18 points.

Now, though, Roscommon take Donegal into their lair in Hyde Park.

For Donegal, it is a potentially dangerous trip – but one where performance means little but the result everything.

“We have to go to Hyde Park and win,” Declan Bonner said.

“We have a job to do there next week and we’ll take the positives from this huge learning curve. Hopefully this will move them onto the next level.”

5. Dubs head out of comfort zone – and into the fire

It was hard to know quite what to make of Dublin.

Even Jim Gavin seemed unsure. As he sat, deadpan as always, in the Hogan Stand’s media room, Gavin seemed troubled at times by what he’d seen from the champions. And yet at others, there was the feeling of a sound evening’s outcome.

“We were in control, that’s for sure,” he said at one point.

“We controlled the game well, particularly in the last 10 or 15 minutes. The subs who came on all brought something to the game and gave us new impetus. We closed it out very well. In this format, it’s all about coming away with the two points.”

However, with Tyrone coming quickly into view ahead of their meeting on Saturday in Omagh, Gavin was quick to add: “The performance won’t be good enough going forward, no matter who we play. That gives us a lot to reflect on.”

Gavin said something about Dublin created chances they hadn’t converted, but there was still a sense that they had more gears. They remain the top dogs and will still take some stopping.