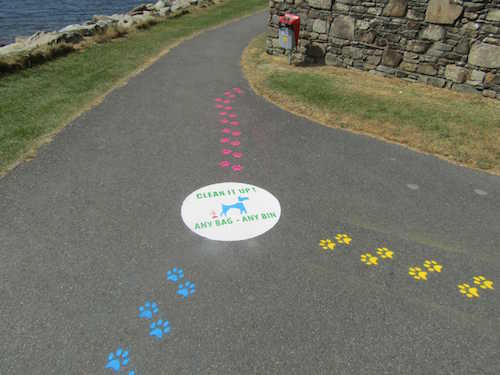 New dog-fouling plan to give owners ‘paws’ for thought

A new initiative by Donegal County Council’s Litter Management team to tackle dog fouling in public places has received a very positive response from members of the public.

This new initiative sees colourful paw prints stencilled on footpaths clearly indicating where dog owners should be disposing of their dog’s litter.

Martin Roarty, Litter Warden for Letterkenny MD, who first introduced the idea to the Council said this is a simple initiative.

“I have seen this working in other places and I thought it would be an idea to try it out in Letterkenny first and I am delighted with the response we have received. It is a great way to deliver an important message in a friendly and positive way and of communicating with the general public on an important issue”.

“We have stencilled colourful paw prints on the footpaths leading to a bin with the simple message ‘clean it up, any bag, any bin”.

“It is about reminding dog owners of their responsibility to clean up after their dogs and we have targeted areas where dogs are normally walked and where dog fouling has been causing a nuisance.

“We hope to introduce this to other areas in the county in the coming weeks and months and last week myself and my colleague Pearse McCrory brought our stencils to the Shorefront in Buncrana where we once again got a positive response from the public.”

He added that dog waste is not just smelly and unsightly, it can cause serious problems in that it pollutes our water and poses a health risk for people, especially children as well as pets.

“Dog owners should always clean up after their dogs and dispose of pet waste properly.

“We are keen to remind the public that you don’t need a special bin to dispose of pet waste, it can be put in any bin as long as it is bagged properly” says Martin Roarty.

It adds up. One pile of pet waste might not seem like a lot; however, thousands of dogs live in Donegal, generating large amounts of waste throughout the county every day.

When not disposed of properly, this waste washes into local waterways and causes problems with human and pet health such as giardia; roundworms; salmonella; other viruses and parasites impacting on water quality and reducing oxygen for fish.

Dog owners or handlers who do not dispose of dog waste in a responsible way could receive an on the spot fine of €150 and failure to pay this fine can lead to prosecution in the District Court with a maximum fine of €3,000.