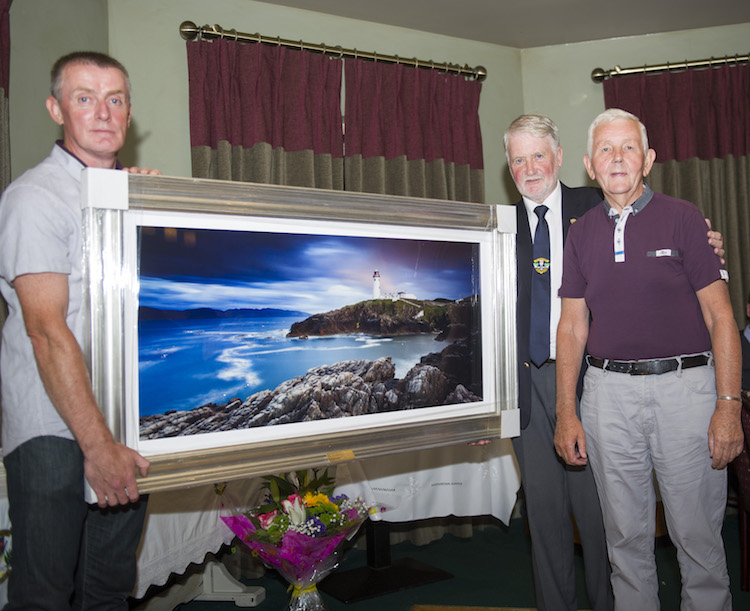 There was a big turnout with the timesheet full.  Tom Redden (17.5)  who has been a member of Letterkenny Golf Club for decades emerged as a very worthy winner on the day with a great score of 45 points.

Sheamus Patton won the Committee Member Prize  with 40 points and the best Past Captains’ Prize was won by Tom McDonagh with 40 points.

Nearest the Pin was won by Kieran Sweeney and Ciaran Gilcreest won the Longest Drive.

There was very good golf played on the day and the top 11 players had scores of 40 or 40+ points. A great day was had by all and presentations to prize winners was held in the Clubhouse that evening. Many congratulations to Captain Hugh McClafferty on what was a very well organised and successful day.

The Pre-Captain’s Mixed Foursomes Competition was played on Friday.  There was a good turnout for this competition.  Jackie Ireland and Eamonn O’Carroll won with a good score of 44.6. Tony Duffy and Mena Breslin were runners up with a score of 46.6 and Eileen Williamson and Tim O’Farrell took third place with 47.9.

The Captains Cat4 Competition (over 13 holes) was won by Jackie Duffy with 35 points (BOT), Frankie McNulty took runners up with 35 points and Hugh Doherty took third place with 34 points.

The Captain’s Prize for Ladies was won by Marian O’Sullivan with a great score of 40 points. Angela Bradley was runner up with 39 points. (BOT) and Maureen Sweeney took third place with 39 points.

There was a Members Competition held on Sunday. Philip Doherty (20.8) was the winner with a great score of 45 points. (Tom Redden seems to have set a trend).