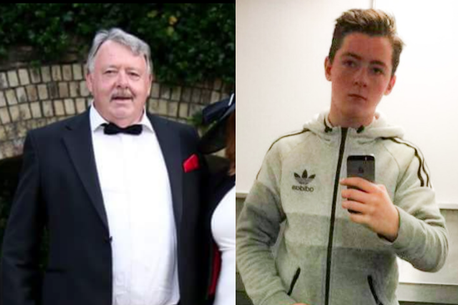 Gerry ‘Malin’ Doherty, who was in his 60s, died after his boat capsized just half a mile out to sea off Malin Head.

Another youth, named locally as Thomas Weir, also drowned in the disaster.

A third man who is in his late 40s, survived after he clung onto a fishing buoy for four hours before being spotted and brought to safety.

The late Mr Doherty’s father Paddy ‘Malin’ Doherty perished when he slipped and fell off rocks some 40 years ago while ‘crabbing’ in the same area.

Local county councillor Albert Doherty (SF) confirmed he had spoken to Gerry’s brother Patsy who had been visiting his brother from London in recent days.

He confirmed this was the second tragedy to strike the family.

“I know the family well and they are lovely people. I was in school with Gerry and he was a lovely guy.

“I called to see his brother Patsy and he pulled out a picture of Gerry and his dad together and said that Gerry didn’t die far from where his father Paddy died 39 years ago.

“It’s very sad for them all and our hearts and prayers are with them all at this time.

“Gerry was a big man and always had a bit of fun. He was typical of our people who left for work in Australia and he also worked in London.

“He married a lovely Mayo woman Marian and they had two lovely daughters and also grandchildren.”

“A big man, a bit of fun and typical of our people he left for work to Australia and worked in London, married a Mayo lady and came back to Carndonagh and then settled in Burt

The boat on which the men had put out to sea was a 16ft cabin cruiser vessel which was owned by the late Mr Doherty.

The boat left the small Port Ronan pier just before 9am in what were described as good conditions.

However, at around noon it is believed the engine on the boat lost power.

The men were understood to be only half a mile out to sea when this happened.

However, it was not until just before 3.30pm that the alarm was raised when visitors staying in a nearby cottage heard cries for help.

They alerted the nearby Malin Head Coastguard station who rushed to the scene.

All emergency services were then tasked to the area after a person was spotted in the water.

The first person taken from the water by winch was 16-year-old Thomas Weir who was immediately taken to Alnagelvin Hospital in Derry.

The youth is originally from Scotland but had been living with his relative Dessie Keenan in Derry.

Mr Keenan, who is in his 50s and originally from Monaghan, has lived in Derry for a number of years.

He was the second man to be taken from the water after he was spotted clinging to a buoy.

He was also taken to Altnagelvin Hospital but has since been released.

Search parties continued to scour the area for the third missing man, Gerry Doherty, who was originally from Carndonagh but who was living in Burt.

Mr Doherty, who was in his 60s, was well-known in the area.

Just before 6pm, a woman spotted what looked like a body on a rocky outcrop close to an area known locally as Banba’s Crown near Malin Head.

A team managed to stretcher the body of Mr Doherty up onto the roadway where he was pronounced dead by a local doctor before he was taken to Letterkenny University Hospital.

Exactly what happened to cause the men’s boat to capsize will be the subject of two investigations.

Garda Inspector Eugene McGovern confirmed that the boat has been recovered and it has been brought to a “safe place” before being examined.

Those investigations will be carried out by both the Gardai and the Marine Casualty Investigation Board.

Joe Joyce, spokesman for the Lough Swilly Lifeboat, says the vessel, a small 16 ft cabin cruiser, would have went down very quickly.

“Once outside the cabin with the engine on the back, they would have had a small enough space to be on. The back of the boat would have gone down first with the weight of the engine.

“They would have found themselves in the water very quickly,” he said.

Once in the freezing waters, the men are understood to have stayed close to the hull of the upturned boat before drifting from eachother.

The men were in the water for at least four hours before tourists walking to a nearby house heard a cry for help around just before 3.30pm.

They contacted the Marine Rescue Centre at Malin Head and the officer in charge, Derek Flanagan rushed to the scene and spotted a person in the water.

He immediately dispatched all the emergency services at his disposal.

A fishing boat coming back to shore spotted Mr Keenan clinging to a fishing buoy and he was taken to shore where he was treated by the ambulance services.

It was only then that the rescue services realised that TWO more casualties were still missing at sea.

At that moment the Rescue 118 helicopter arrived on the scene and soon discovered Thomas Weir in the water wearing a lifejacket.

He was winched from the water and taken immediately to Altnegelvin Hospital in Derry.

However, despite the best efforts of medics, the young man passed away following his ordeal.

As the rescue teams at sea continued to search along the debris stream, passers-by on the shoreline spotted another casualty washed up on a rocky outcrop close to Banba’s crown.

The RNLI inshore boat was in the area and two members of the team swam to shore to give assistance and administer first-aid.

The casualty turned out to be Gerry Doherty.

Members of the rescue team carried the casualty for more than half a mile to the roadway where a local doctor pronounced him dead at the scene.