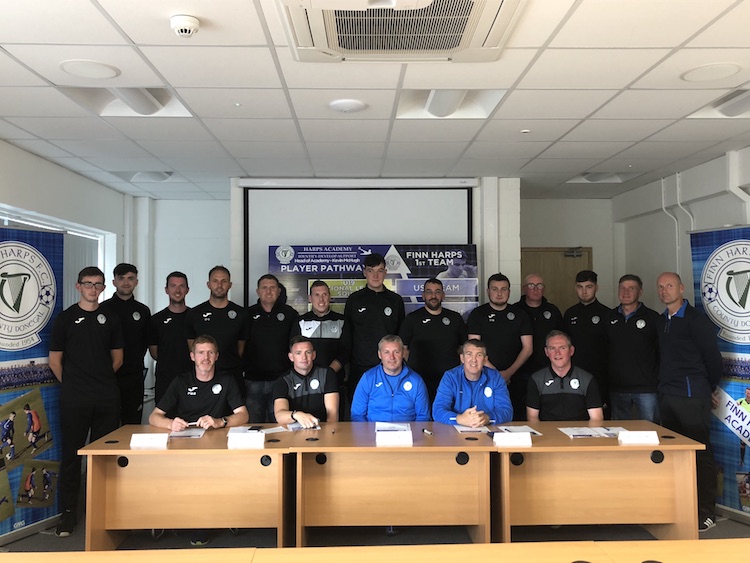 Finn Harps have announced some big changes to the structure of the club’s academy, with new appointments revealed this evening.

Pól Mac Giolla Bhríde has been named as the club’s new Under-15 Head Coach for the 2019 season.

Finn Harps’ Head of Academy, Kevin McHugh, is currently in charge of the Under-15s and the former Harps striker will manage the new Under-13 team for next season’s inaugural League of Ireland U13 League.

“These are the kind of characters we are looking to get into the club,” McHugh said at a press conference at the Finn Harps Academy’s office at The BASE Centre in Stranorlar.

“If you have the wrong type of person in, players won’t develop as well. We will be building backroom teams soon and will be doing player IDs.”

Of his own impending move from U15s to U19s, McHugh said: “It makes sense for me to get closer to the U12 Development Squad. We all train under the one umbrella anyway so this is good practice going forward.

“We all do similar work and improve them as we go up the levels.

“We try to work with schoolboy clubs as best we can. Clubs in Dublin take them in at 6, 7 and 8, which is too young. We have gone down as far as Under-12s for a development squad.”

McHugh presented a new blueprint – under the motto ‘identify, develop, support’ – for the Finn Harps Academy. The club will have Development Squads now at Under-12, Under-14 and Under-16 levels, to feed into the National League teams at Under-13, Under-15 and Under-17.

He said: “We can fit so many players in. We will try and keep all the players involved. So, if a player doesn’t make it at Under-13 level, he may develop for Under-14s.

“You’d be a genius if you could pick a player at Under-12 level and say for certain if he could or couldn’t make it. This will leave us with a nice level playing field. We get elite players in and we can leave room for the late developers.”

McHugh pointed to Jamie Browne as a big success story of the Finn Harps Academy. Browne has played all the way up the levels and this season made a first team appearance under Ollie Horgan.

Several players have had international call-ups and the likes of Marc Walsh, Shane Blaney and Conor O’Reilly obtained moves across the water to clubs in England.

James Rodgers, Finn Harps’ Chairman of Youth Development, cited the ‘many months of hard work’ that had taken Harps to this point.

“I came into the Board 15 or 16 years ago and Finn Harps was one team – the first team,” he observed.

“The review that has taken place came off the back of us doing an inventory of our coaches, players and teams. We broke it down and from one team we have multiple teams and hundreds of footballers. We have 50 plus coaches at underage level alone.

“We are delighted with it. It’s still in its infancy. We have had tremendous success with players on the pitch and within the academy.”

McHugh highlighted the importance of the Finn Harps Ulster Senior League team, managed by Joe Boyle, in transitioning players between Under-19 and senior levels.

“It’s a huge advantage and one that other clubs in the League of Ireland would love to have because that gap is massive,” McHugh said.

The Harps Academy train out of a base they have leased in Killygordon and McHugh added: “We don’t have five-star facilities, but the grounds in Killygordon are fantastic.

“We have facilities, we have the coaches – that’s what we need to help push players on through the levels.”