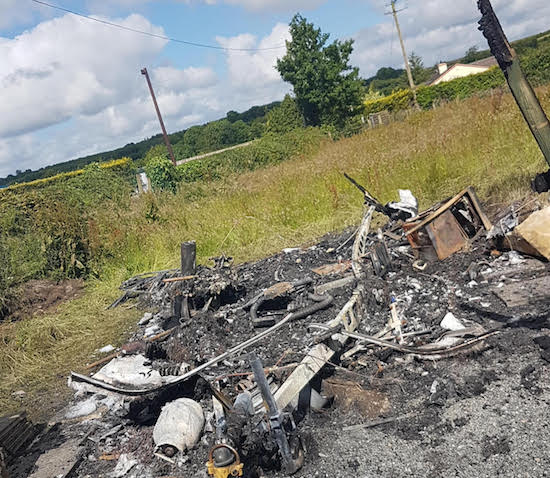 A Donegal family have been targeted in what they believe was an arson attack which they say could have had catastrophic consequences.

The Murray family, who reside at Ruskey near Convoy, had their caravan burnt out in the early hours of the 21st June last.

The caravan was parked adjacent to the family home, and they say they are lucky to be alive.

Teresa Murray said her grandchildren often stay with her, and when they do they often play and sleep in the caravan.

She explained what happened on the night of the attack.

“I was in bed at around 3am when I heard these bangs from the back of the house. I quickly got up and looked out the window and could see the flames rising from the caravan.

“We ran to quickly get the car moved and then there were two more bangs, these were the gas tanks exploding from the heat. The caravan was completely destroyed, along with everything in it.

“It is scary to think what might have happened had anyone been in the caravan, we would surely have been looking at fatalities here.

“Since the attack my family have been extremely upset that anyone could do this to us. We are now living in fear that such a thing could happen again, and we are afraid to stay in our own homes.

The Gardai are currently investigating the incident and the family have appealed for potential witnesses to come forward.