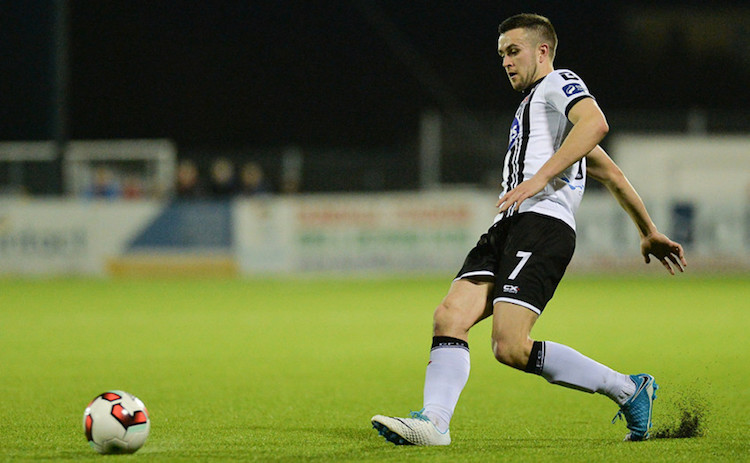 Michael Duffy had already been named-checked by Martin O’Neill this year – and now hopes his Europa League cracker on Thursday will have given weight to his chances of a Republic of Ireland call-up.

Duffy netted a stunning volley in Dundalk’s win over Levadia Tallinn at Oriel Park; a strike that was liked to Marco van Basten’s legendary goal in Euro ’88 by Lilywhites boss Stephen Kenny.

Before Ireland’s recent friendly with Celtic, O’Neill mentioned Duffy as one he was keeping an eye on and the Irish manager was in Dundalk to see Duffy’s spectacular goal in the flesh.

“It’s good that he was here and scoring in front of him is a good thing – but I haven’t heard anything on international things for me,” Duffy said.

“So whatever comes, I’d be happy with.

“Obviously I’d love to play under Martin O’Neill. I’d play under any international manager, it’s a huge thing to play for your country. If the time comes, I’ll just worry about then.”

The 23-year-old has featured for Northern Ireland up to Under-21 level and was called into the senior squad by Michael O’Neill last year.

Duffy, who played at schoolboys level with Kildrum Tigers and whose family hail from the St Johnston area, signed for Dundalk from Celtic having moved into Derry City’s first team.

“As soon as I saw Jamie McGrath look up, I knew he was going to play that pass and that, no matter what way it was going to come to me, I was probably going to shoot,” he said.

“There was no other option. It was awkward, it was a bit of a tight angle.

“When it was in the air, I probably didn’t think I was going to score with it. But I’ve just connected with it well and it’s went in. I couldn’t have caught it any sweeter.

“I’ve practised stuff like that in training, just carrying on, volleys and that. I’m right-footed. So it’s always the left-foot volleys that I practise.”