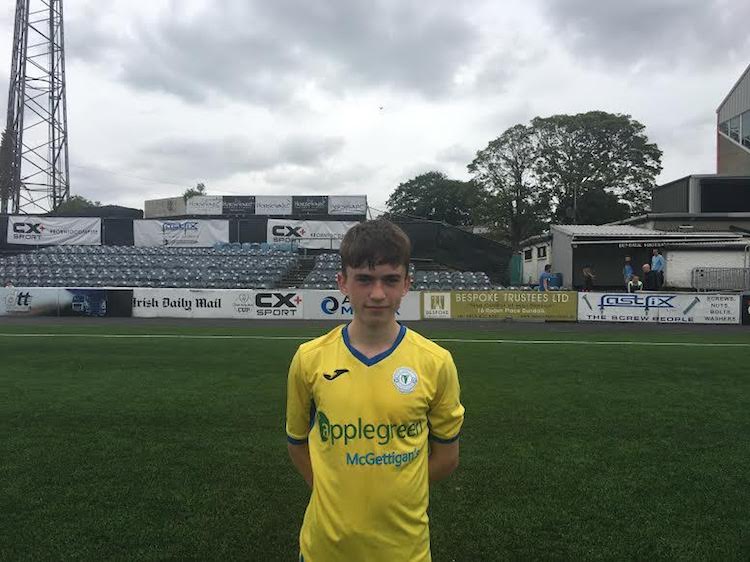 It was a super Saturday for Finn Harps’ underage teams

It was a super Saturday for the three Finn Harps underage sides in action in their respective National League campaigns.

Down in Dundalk, Kevin McHugh’s U15s bounced back in impressive style with a 1-0 win thanks to a Daniel Gildea (pictured) goal.

The previous weekend the 15s had lost for the first time in Group 1 to St Patrick’s Athletic. McHugh’s boys have assured themselves a place in the knockout stages of the competition.

Finn Harps came away with three points on Saturday after a hard earned 1-0 victory over Dundalk at Oriel Park.

The first half was a quiet affair though it was the home side that could have opened the scoring early on when Sean O’Donoghue was presented with a chance though Paddy McGarvey was quickly out to deny the forward twice, initially with his right foot before getting his hands to the rebound.

Drew McKinney had the best opportunity of the opening half when he was played in on goal however he saw his lobbed attempt fly harmlessly over the crossbar.

Harps started the second-half with much more impetus and Fionnan Coyle almost give them a lead when he fashioned a left footed shot after a fine solo run beating 2 defenders, though Jamie Barry was down quick to save the driven effort.

Midway through the half Luke McGlynn went close for Harps when he connected with a clever free kick from Gildea though from the edge of the area his shot rose over the bar.

Harps finally made the breakthrough with 12 minutes remaining when substitute Jack Dwyer reacted quickest to nip in in front of keeper Jamie Barry from a short back-pass forcing Barry into a save, the resulting rebound falling to Gildea who composed himself to fire into the empty net.

Dundalk were given the chance to equalise only four minutes later when the referee awarded them a penalty for handball. Michael Soyemi was tasked with the responsibility to convert the spotkick though saw his well struck effort crash back off the post before the referee blew for a Harps free kick during the rebound.

Harps have another tricky away encounter next weekend when they travel to face Bohemians in Dublin.

Stephen Doherty had got the opener. The hosts pulled one back but then Jamie Browne popped up with a crucial third goal in the closing stages. Joe Boyle’s side did have to endure a few anxious moments after the Drogs converted a late penalty.

The third part of the Super Saturday triumph saw the Finn Harps U17s defeat Drogheda 3-0 in Ballybofey with skipper Darragh Ellison on the mark twice. Ellison got the first with Gabby Aduaka doubling that advantage. Ellison’s second goal came from the penalty spot.

It was a super Saturday for Finn Harps’ underage teams was last modified: July 22nd, 2018 by Chris McNulty