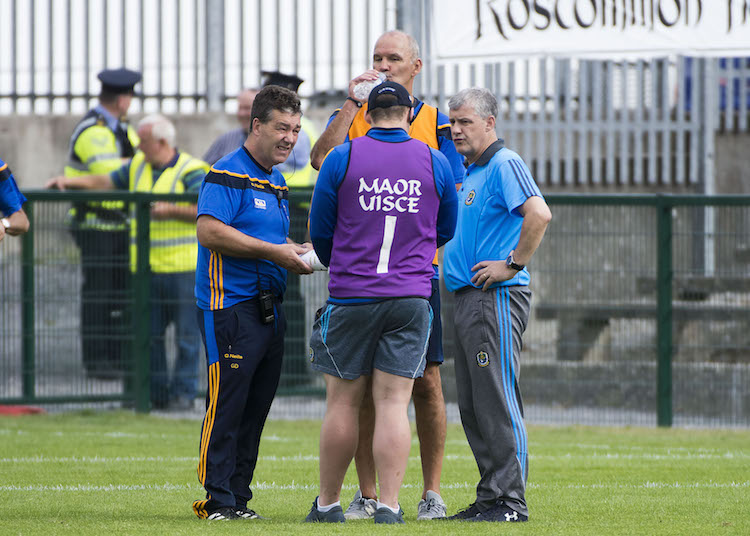 The Roscommon manager, Kevin McStay, could find himself in hot water after clashing with an official at half-time in their defeat to Donegal yesterday evening.

McStay fumed after he felt his side were denied two frees in the closing stages of the first half at Dr Hyde Park.

McStay confronted linesman Niall Cullen and appeared to hit the Fermanagh official with a ball that he threw in anger.

McStay subsequently went to apologise to Cullen for the incident but referee Ciaran Branagan told the Roscommon boss that he had been ‘overly aggressive’ and sent him to sit in the stand for the second half.

“I threw a ball that had no intention of hitting him and apparently it landed on his shoulder or head,” McStay said.

“I was throwing it to where I thought he was giving the free and then Liam (McHale, assistant manager) said he had blown it up for half time.

“Of course that further agitated me. We are all under pressure, maybe I was more aggressive than I should be.”

McStay was incensed at half-time and raged against the decisions.

He said: “They were two dreadful calls.

“Michael Murphy pushes one of our lads on the solo and kicks it over. Fair play, he’s a big strong man – I’m not giving off to him now. I have huge admiration for him, but it should have been a free-out.

“And then the one before half time…Everyone in the stadium knew that was a free. Ciaran was apparently blind-sided and I totally accept that. But the linesman wasn’t blind-sided; he had a perfect view of it for me.”

McStay says it’s time for officials to be called to account for their decisions.

McStay could face a 12-week ban for his part in the incident with the CCCC set to review the matter.