Here’s how the All-County Football Leagues are shaping up

Things are taking shape across the All-County Football Leagues as the divisions all head for the home straight at this stage.

Only Downings in Division 4 are completely certain of their destination for 2019 as they have already secured the honours.

The teams at the foot of the top three divisions are all-but relegated, but they are not mathematically confirmed just yet.

Gaoth Dobhair’s win over Aodh Ruadh keeps the Magheragallon men on course at the summit and it appears a three-horse race, also including Naomh Conaill and St Eunan’s for the Division 1 honours.

There are just three points between those teams now.

At the other end, it seems just a matter of time before Dungloe’s relegation is confirmed.

It has been a difficult campaign for the Rosses Park side, who have won just once.

Aodh Ruadh, Glenswilly, Cloughaneely and Milford are parted by only a combined four points. Milford claimed an impressive win over Kilcar yesterday, which injects serious confidence into Moyle View Park.

Next weekend, Aodh Ruadh host Milford in a key contest.

Defeat at home to Naomh Columba yesterday means Sean MacCumhaills’ lead is down to a point at the summit. Second-placed Bundoran, who have a game in hand, defeated Termon and, with Paul and Jamie Brennan yet to return to their arsenal, the Stars of the Sea will fancy their chances of winning this Division.

Just five points separate the top seven teams here and, with a handful of fixtures to go, anyone could creep into the reckoning.

Naomh Muire, who suffered another home loss to Ardara yesterday, occupy the bottom spot and appear set to make the drop.

Glenfin had a vital win over St Naul’s yesterday, while Four Masters’ confidence will have taken a battering with a pummelling by Malin. 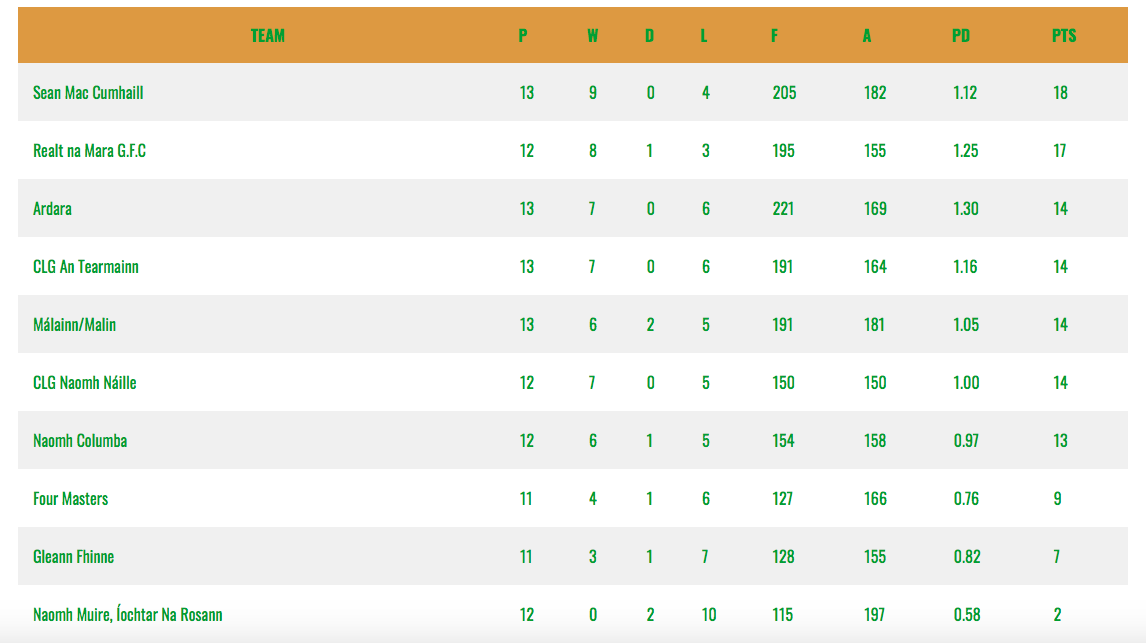 Good luck trying to predict the outcome in Division 3, where the margins are wafer thin.

Killybegs were beaten 1-9 to 0-8 by Naomh Bríd at the weekend and considerably tightens the margins again.

Killybegs are in the driving seat but have played more one game more than Buncrana, two more than Naomh Bríd and Naomh Ultan while Red Hughs and Gaeil Fhánada have three games in hand and are only five points behind the Fishermen.

Na Rossa, who have yet to pick up a point, looked doomed at the basement, while Moville, Burt and Convoy remain in a survival scrap. 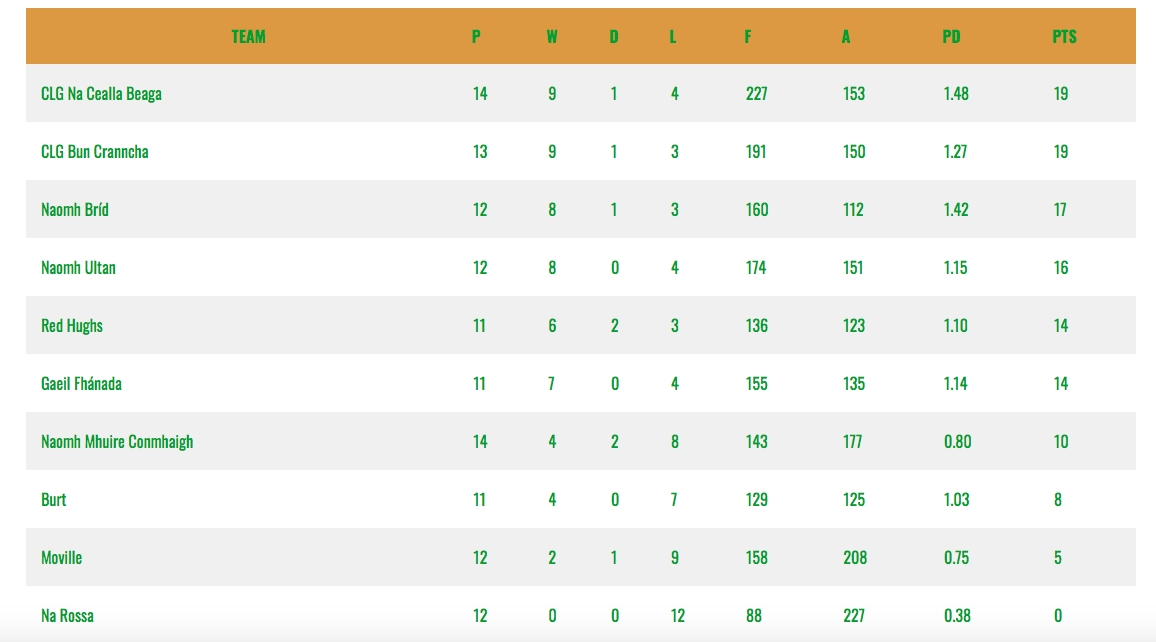 Downings maintained their flawless League record as they made it 13 wins from 13 games against Robert Emmets yesterday. Downings are assured of promotion and will go back into Division 3 as Division 4’s champions.

Downings have had an excellent season, winning the All-Ireland Junior Gaeltacht title on home soil in June and now just one win away from having the perfect League campaign.

Who joins them in the elevator is an entirely different matter, however.

Naomh Colmcille have an ever-so-slight edge on Urris, but only by virtue of the fact that Ryan McKinley’s team have a game in hand.

That outstanding fixture will be against Carndonagh, who are in fourth place.

Here’s how the All-County Football Leagues are shaping up was last modified: July 23rd, 2018 by Chris McNulty