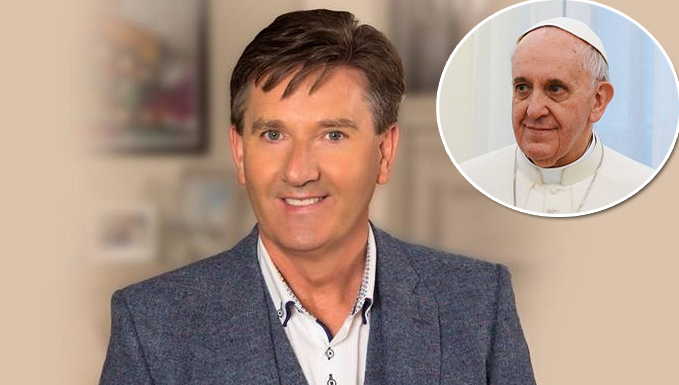 Majella laughs off claims that Daniel should withdraw from Pope gig

Majella O’Donnell has branded claims her husband should withdraw from Pope Francis’ concert next month as “daft and ridiculous”.

Majella, 58, spoke out as her hubby Daniel’s would-be rival took to the airwaves to say his pro-gay marriage stance should rule him out of the Croker gig.

As previously revealed by the Irish Sun, gospel singer and You’re A Star runner-up James Kilbane said Daniel should apologise or be removed.

But defiant Majella shot that down, insisting: “The idea of apologising is ridiculous.”

Kilbane said: “How can Daniel O’Donnell perform for the pope when his Yes stance in the gay marriage referendum was directly opposed to the Catholic Church here?

“What’s more, I believe Daniel O’Donnell’s stance may have influenced many Catholic people to vote Yes in the Referendum.

“Of course everybody is entitled to their opinion and democratic vote but I think the organisers of this event have questions to answer about this choice of act.

“How can some artists be at odds with the beliefs of the Catholic Church and yet be booked for a high-profile event for the pope?”

But when contacted by the Irish Sun, Majella said: “It’s daft and ridiculous. That’s what I think.

“He (Kilbane) is entitled to his opinion but the idea of apologising is ridiculous. It’s so daft and ridiculous, it’s not even worth giving an opinion on. I have no further comment about it.”

In the run-up to the 2015 Referendum, singer Daniel explained his backing for Yes, saying: “I just feel we’re discriminating against a lot of people who feel their lives would be better.

“I can’t see anything on the other side that will be detrimental. All of the people who know what they’re talking about are telling us it’s absolutely no difference who brings up the children, as long as they’re brought up in a loving environment.”