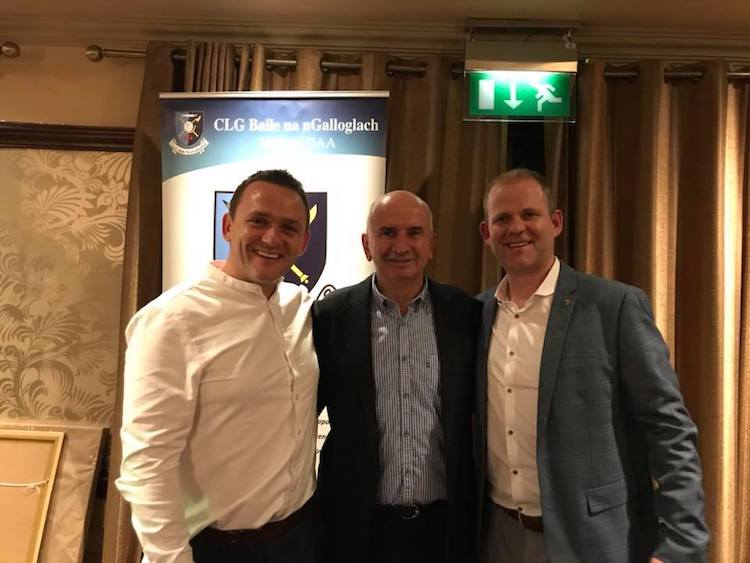 The Glenswilly man, who won the National Rally in 2005 when driving a MK2 Escort, has gone to a new world since stepping into a WRC Impreza.

With his trusted lieutenant, Milford’s Donall Barrett, on the pacenotes, Kelly rocketed to glory across Donegal’s 20 special stages in June. Kelly and Barrett hosted a night of celebration on Saturday night in the Mulroy Woods Hotel, where they were joined by around 250 guests.

That the room included the likes of Donegal International Rally icons like Andrew Nesbitt – a six-time winner – Cahal Curley, John Lyons, James Cullen, Vincent Bonner, Seamus McGettigan, Declan Boyle, Gary Jennings and Rory Kennedy perhaps said it all: This was an achievement that even the legends and the rivals felt the need to toast.

“It’s been brilliant what we have achieved and it’s great to see so many people here,” Kelly said.

“It’s great to see so many previous winners here.

“Winning this rally is something very, very special. It’s a phenomenal experience. It’s mad and it feels like living a dream.”

Kelly said he would be ‘forever grateful’ to Crumlish, a native of Moville, based in London, who was recruited via a connection made by Barrett.

Kelly paid tribute to his team including the staff of Tommy Gallagher’s Sports Clinic – Tommy, Avril McNamee and Liam Paul Ferry – with whom he had punched in over 300 training session, as he treats his sport now like any elite athlete.

He singled out his long-term friend David McGinley, whose work in psychology has proved so key.

“David gave us focus and belief that brought our performance to a new level,” Kelly said. “In all the years we were rallying, we didn’t put in such preparation. Through David, we learned how to prepare mentally and tactically – and that was such a big part of the success.

“He helped us to connect with the car. That connection has been vital.”

The Crumlish family, gravel note men Paul Harris and Seamus Doherty, PR and Facebook operator Danny McMenamin and the father-daughter team of Aidan and Alannah Cannon, were all mentioned by Kelly in his address, with Cannon and Lifford man Odhrán McGettigan credited with the spadework in obtaining a lucrative sponsorship deal with Applegreen.

Kelly and Barrett’s trio of wins were in an Impreza hired from Melvyn Evans Motorsport.

“Melvyn and the team were just phenomenal,” Kelly said. “They went above and beyond the call of duty. They had professionalism in difficult moments and we were able to do everything without distraction.”

Kelly was presented with the Jim Kennedy Memorial Cup by Rory Kennedy, while James Cullen presented the Ellen Morgan Trophy to Barrett.

Presentations were also made by Kelly and Barrett to their respective families and sponsors.

Kelly hailed the influence of Barrett in the cockpit of the Impreza.

He said: “Donall could sit with any World Rally driver. He plays down his role all the time, but that car is at break-neck speed. When Donall says it’s flat, then it’s flat.”