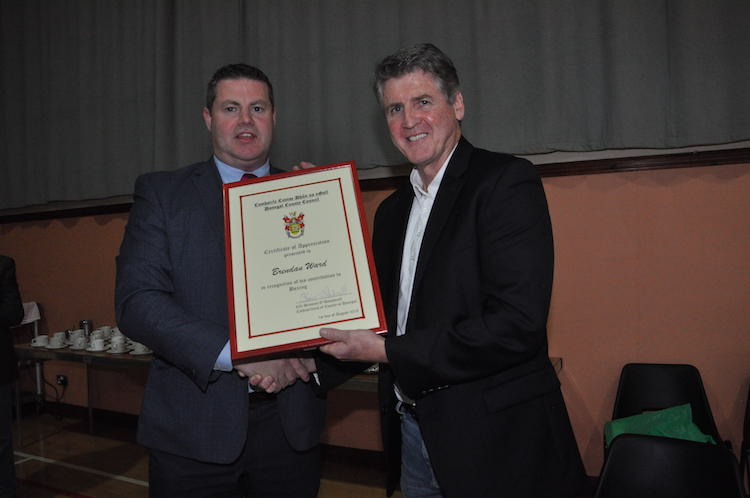 Former boxer Brendan Ward was honoured yesterday evening at a function in the Ozanam Centre, Dunfanaghy for his services to boxing.

Ward, who started boxing in Letterkenny in 1976, left Donegal for America in the early 80s.

After boxing as an amateur, Ward turned pro before setting up a gym in the Upper Darby area of Philadelphia. There, he aided troubled children in the area, through boxing and was recently honoured.

A native of Creeslough, he was described by the Donegal Boxing Board President, Peter O’Donnell, as ‘a great legend and a great ambassador for boxing here and in Philadelphia’.

“Boxing basically is my life and everything happened in my life because of boxing,” Ward said.

The Mayor of Donegal, Seamus Ó Domhnaill, presented him with a scroll on behalf of Donegal County Council.

Former Commonwealth Games bronze medallist Paddy Doherty made a presentation from the Donegal County Board, while Niall McLaughlin (Letterkenny ABC) and Eddie Harkin (Dunfanaghy ABC) made presentations on behalf of local clubs

Ward used to thumb a lift from Creeslough to Letterkenny to train three times a week.

Niall McLaughlin said the Wards had helped to build the Letterkenny club while Eddie Harkin noted the local pride in Ward and also another former pro from the area, Anthony McFadden.

Among those in attendance were John Gallagher and Paul Mayse from the Two Castles club in Tyrone, while Buncrana native Mark Porter, who is on a visit back from Boston, was also present.