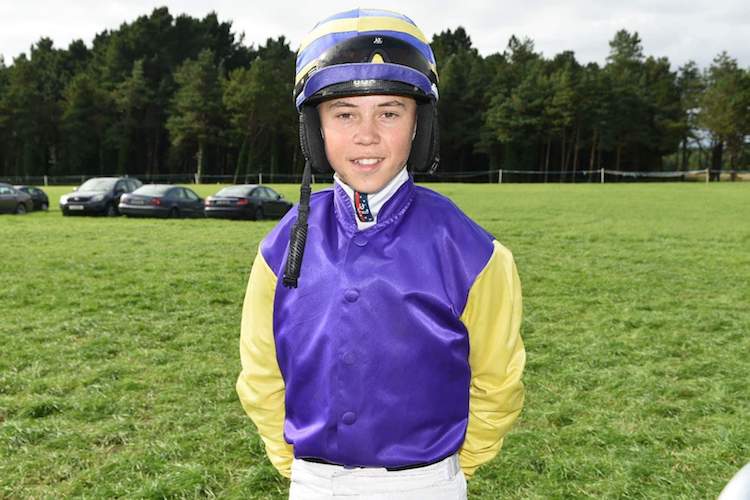 Treble for Browne McMonagle, but Nicole Yemm steals the show in Ballintra

written by Chris McNulty August 7, 2018
FacebookTweetLinkedInPrint
Dylan Browne Mc Monagle rode his first ever winner at Ballintra back in 2015 and came back to take the Champion jockeys honours at the bank holiday venue with a sparkling treble.
Dylan got of to the perfect start when 6/1 shot Lets Roll got the ball rolling when swooping late to deny long time leader Thunder Struck in the shadows of the post to win by 1 length and quickly double up in race two the 10 furlong open aboard Athea Jade making all the running and running out a comfortable winner.
The 15-year-old capped of a good day at the office when getting the fractions spot on with an all the way success on Churchall in the concluding race the 12 furlong Non Winners bringing his tally to 54 for the season so far.
Co Antrim rider Sam Ewing got of the mark in the 153cm when making all on board Watch this Space to score easily and got his Double aboard Walk The Line in the 2mile winning in good style taking up the running from half way for a snug win.
The Feature race of the day was win by Mr Mac for 12 year old rider Co Galway rider Danny Gilligan taking up the running from the bell and going on for a most impressive win. These three riders Dylan, Sam and Danny are three jockey’s that are going to go far when going under rules injury free.
The most sporting and heart warming thing ever seen in the history of Horse & Pony Racing was in the local race for kids when the two ponies set off and after a furlong Cian McNally was unshipped from Made Of Candy and when  Nicole Yemm looked back on Blossom and spotted the young 9 year on the ground she pulled up and went back to the start.
When the starter sent them on there way for the second time Cian Mc Nally got home on Made Of Candy in an exciting finish to beat Blossom but in truth there was two winners here and both jockeys got a terrific applause by the huge Ballintra crowd.
Nicole Yemm, daughter of the former point to point rider Gwyn Yemm, will be rememberd for a long long time with her sporting gesture and the little 9-year-old  jockey Cian Mc Nally quoted afterwards in an interview that Nicole Yemm will be his friend for life.
Itcertainly was an emotional ending that did shed some tears from the large Bank Holiday crowd.
Treble for Browne McMonagle, but Nicole Yemm steals the show in Ballintra was last modified: August 7th, 2018 by Chris McNulty
FacebookTweetLinkedInPrint
Tags:
BallintraDylan Browne-McMonagleletterkennyNicole Yemm