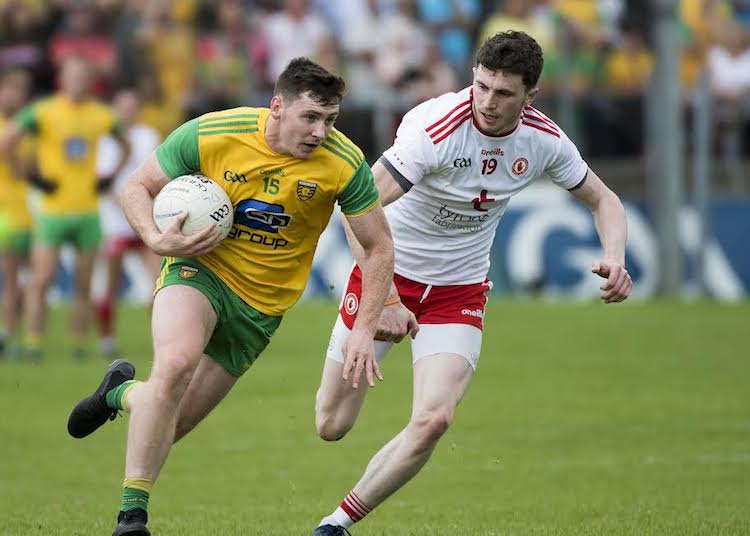 It was just three and a half minutes into the second half when Mickey Harte leaned over the chessboard and made his move.

Harte summoned Lee Brennan and Kieran McGeary from the bench, with Tyrone trailing by four points as Peter Harte prepared to take a free that would narrow the deficit a little.

Ryan McHugh’s intended knockdown for Jamie Brennan was intercepted by the tenacious McGeary. Tyrone transferred for Lee Brennan to score from his first touch.

A minute later, Jamie Brennan dropped one into the arms of Niall Morgan, the Tyrone goalkeeper. Again, Tyrone stormed forward, Lee Brennan sold Hugh McFadden a dummy and dipped a shot just over the crossbar.

In the grand scheme of things, the late goals by Harry Loughran and Declan McClure, two more who had been kept in reserve by Harte, were priceless, but those earlier moments helped bridge a gap at a key period for Tyrone.

“There is only so many times you are going to back a dog into a corner, they are eventually going to bite,” McGeary said.

“It is the sign of a good team that can go neck and neck in tight games and come out on top. We have done that a few times. It is right every day we go out.”

A 2-17 to 1-13 win over Donegal in Ballybofey sealed a place in a seventh All-Ireland semi-final during Harte’s reign as manager.

Tyrone got real bite from their bench on Sunday, but it should come as no surprise.

Already in the 2-18 Championship Tyrone substitutes have scored 6-19. In Ballybofey, the tally from the replacements was 2-5 and aided Tyrone to outscoring Donegal 2-7 to 0-2 from the 55th minute.

“It’s a hit and miss job because you want to introduce people to make a difference in the game and, through the Qualifiers, we’ve discovered how important that is,” Harte said.

“There are people who didn’t start the game today who are worthy to be on the team but they are also big enough to play for the team and come in knowing that they’re going to make a difference. If you started them, you wouldn’t be sure that the people that you would be leaving off could come in and make the same impact.

“There are players who are good at that – obviously Kieran McGeary stands out as a really quality player at that particular role. But all the people we introduced gave us a contribution and that’s all we wanted off them, something to make a difference.”

It is something that Harte has been building and it is certainly a new phenomenon. Consider that in 2008 when Tyrone last won Sam Maguire subs accounted for 0-10 in the entire campaign – and that included six Tommy McGuigan points in an Ulster defeat to Down.

That has changed and changed utterly.

In the 2016 Ulster final win over Donegal, McGeary, Darren McCurry and Rory Brennan kicked killer points and Ronan O’Neill netted a brace of goals in the 2017 Ulster final against Down.

McGeary said: “There is a window that presents itself in the second half and you either go for it or you don’t. You can either come on and be quiet or you can come on and try your best.

“It is easy when you come on in the second half when boys are tired and their legs are falling off. It is easy for us to come on then, to be full of energy.

“You see the Dubs doing it all the time, they empty their bench, they get the window of opportunity and they take it.”

Tyrone were inches from exit and perhaps Harte on the brink of the end of an era late in the evening in a qualifier against Meath in June. There, a Loughran goal got them over the line in extra time and now they stand just 70 minutes away from the fourth All-Ireland under Harte’s watch.

It was Loughran who provided the checkmate moment on Sunday with a 63rd minute that turned the tide, but McGeary managed to weigh in with a magnificent point just beforehand.

The Pomeroy man is quite content to kist play his part.