There were emotional scenes and tears of joy and sadness last Wednesday night for a Donegal family at Dundalk Stadium.

Ardnasool Jet is owned and trained by brothers Adrian and Cathal McGhee from Ballindrait.

Their nephew, Emmet McGhee, was part of the team that prepared Ardnasool Jet in the early stages of the Sprint Cup. Emmet was in the stands for the first two rounds before tragically passing away at the end of July.

Emmet previously got his hands on the trophy when he spent some time working with Trainer Peter Cronin in Mooncoin and was part of his team that won the competition in 2014. 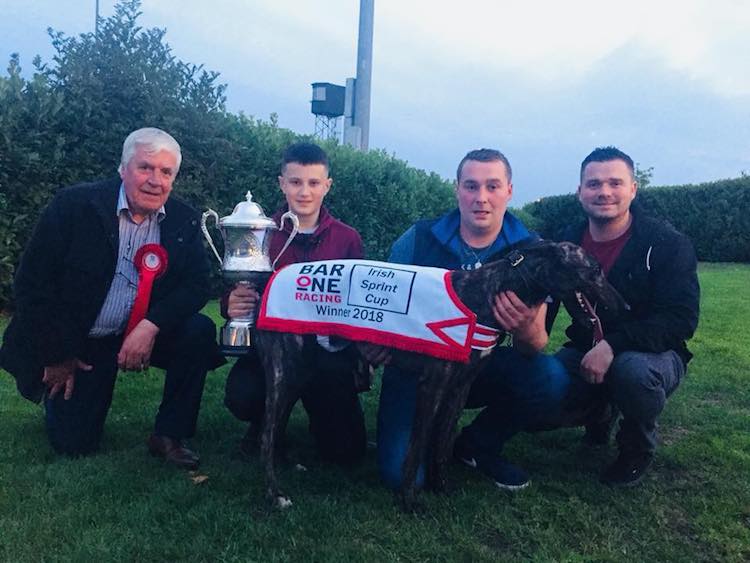 The McGhees decided to run Ardnasool Jet in the final – and the 3/1 second favourite edged out Broadstrand Kiwi to claim the €20,000 first prize in a time of 21.07.

Emmet was 21, and he had just completed his second year of studying accountancy at LYIT. He also worked part time in Paddy Power.

Emmet, like most of his family, was heavily involved in greyhounds – coursing and the track.

One of the highlights of his short career was when he and his family led Man of War to the TA Morris Derby purse in Clonmel in 2013.

He was surely looking down with pride on Wednesday night.

And on Saturday night at Lifford, Cathal McGhee proudly paraded Ardnasool Jet at the race meeting.