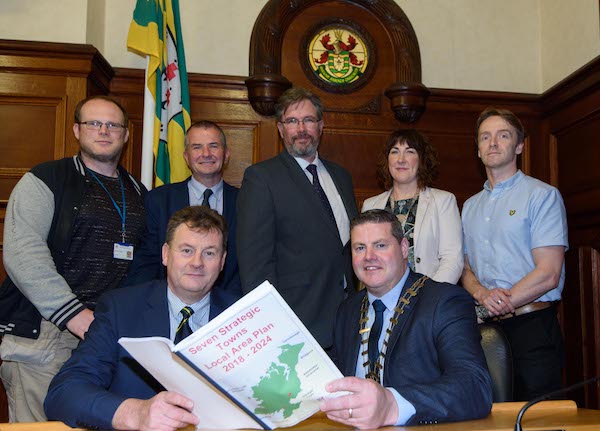 The Plan was adopted by the elected members of Donegal County Council on July 23, 2018, and is the first consolidated local area plan for An Clochán Liath/Dungloe, Ballybofey-Stranorlar, Ballyshannon, Bridgend, Carndonagh, Donegal Town and Killybegs – between 2018 to 2024.

This new Seven Strategic Towns Local Area Plan supersedes the County Donegal Development Plan that was in place from 2012 – 2018.

This new Plan was adopted following an extensive public consultation process including engagement with numerous stakeholders in each of the respective towns and sets out an overall strategy, land use and zoning objectives for the proper planning and sustainable development of the seven towns guiding the way in which the towns will be developed into the future.

The six-year-long Seven Strategic Towns Local Area Plan is consistent with the Core Strategy of the recently adopted County Development Plan which came into effect in early June.

Chief Executive of Donegal County Council Seamus Neely believes that the adoption of this Plan is timely.

“The timing is excellent in that this Plan was adopted shortly after the County Donegal Development Plan came into effect in early June and also following the recent publication of the new National Planning Framework which has identified a number of national strategic outcomes including enhanced regional accessibility and strengthened rural economies and communities.

“This Local Area Plan is a very important document in the context of this National Planning Framework and will have a key role to play in unlocking the strategic potential of these towns which will in turn contribute in a meaningful way to the social, cultural, environmental and economic growth and well being of the entire county”.

“This Seven Strategic Towns Local Area Plan is a very important Plan for Donegal.  It sets out an overall strategy as well as land use and zoning objectives for the proper planning and sustainable development of the seven towns in question and I would like to thank my colleagues on Donegal County Council for their deliberations and their concerted effort in framing this plan and for engaging in this process in such a constructive and positive way.”