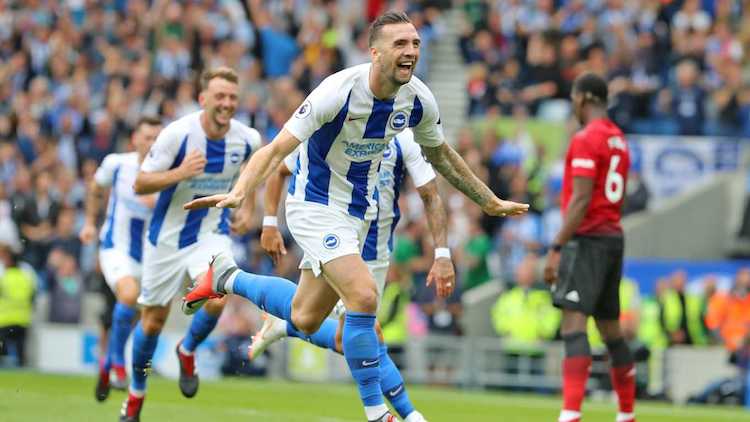 Shane Duffy was on cloud nine after netting his first Premier League goal on Sunday as Brighton and Hove Albion defeated Manchester United 3-2 at the Amex.

It proved a memorable day for Albion. Romelu Lukaku did pull one back, but Pascal Gross’s penalty made the win safe and rendered Paul Pogba’s late penalty as little more than a consolation.

Duffy was named the man of the match on Sky Sports – to the delight of his many Donegal supporters.

Duffy has strong Donegal connections. His father, Brian, hails from Ard O’Donnell in Letterkenny while his mother, Siobhan (Kelly) is a Raphoe native.

“I don’t score many, but that one was good,” Duffy beamed.

“I’m a little disappointed I haven’t scored more, but it was big scoring against Manchester United at home.

“It was nice – I could have got on the first ball into the box but just missed it, so it was nice to finish the second one.”

Brighton lost 2-0 to Watford in their Premier League opener the previous week, but were energised by Sunday’s win.

Duffy said: “We just didn’t turn up last week; obviously it’s not hard to get up for a big game and being at home makes a huge difference to us. We have to take that into our away form now.”

There is little time for Brighton to rest on any laurels, though.

Their next mission takes them to Anfield on Saturday to face Liverpool.

Duffy said: “We still have the same goals in this league, we just need to get as many points as we can and take it game by game.

“We obviously loved the result and it’s three points, but we know what’s coming up next, so we need to get ready and dust ourselves down. Now it’s all about preparing for Liverpool.”