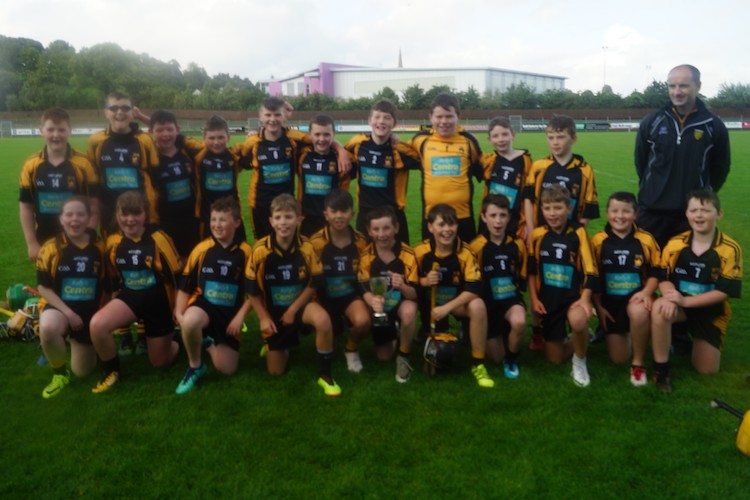 In a thrilling final played in tough conditions on Thursday evening in O’Donnell Park Letterkenny, St. Eunan’s edged out Mac Cumhaills to retain the county under 12A hurling title.

Scores were very hard to come by in a first half played in driving rain.

The home team took advantage of a strong breeze to open the scoring through a long range Ethan Mulholland point in the 8th minute.

With Shane Ellison, Brendan Gaffey and Joseph Duddy providing a strong platform in midfield St. Eunan’s dominated the remainder of the first half.

Two further points from impressive St. Eunan’s captain John Kealy in the 12th and 17th minutes were all the Letterkenny boys had to show for their possession, leaving the score at half-time 0-3 to 0-0.

With conditions improving slightly the visitors stormed back into the game after the break.  The outstanding Daniel Donnelly opened his team’s account with a free from the sideline on 22 minutes.

Kealy and Donnelly exchanged two further frees each before Darragh McGranaghan made a vital breakthrough for St. Eunan’s in the 28th minute, finishing to the net from close range after a through ball from Sarah Lambe.

Mac Cumhaills, driven on by Jacob Malone, Dylan Patton and the ever dangerous Sean Brady-Devenney, came back again and closed the gap to three points with two quick frees from Donnelly.

They almost equalised in the 32nd minute when an unstoppable shot by Donnelly rocketed off the crossbar.  Ryan Browne seemed to strike a decisive blow for St. Eunan’s with five minutes remaining when he struck to the away team’s net after good work from Ben Gallagher and Ryan Stacey.

Once again Mac Cumhaills refused to give in.

Fionn McNulty made a superb save from Kealy.  From the resulting 65 Kealy made a great catch but saw his goalbound effort rebound off the crossbar and cleared by Paidi Kelly.  Donnelly ensured a grandstand finish when he goaled with two minutes left after being set up by Cathal McFadden and Craig Russell.