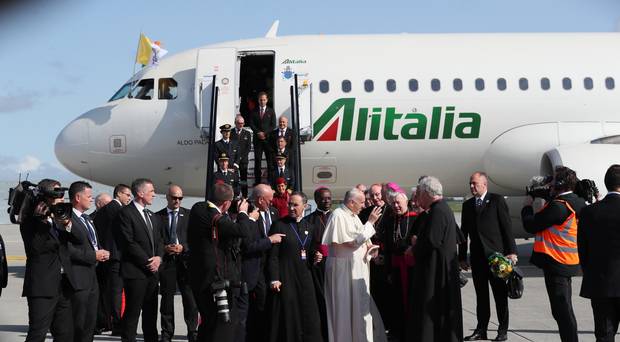 POPE Francis has started his official visit to Ireland and said he is delighted to return to Ireland, having spent three months in Dublin almost 30 years ago to study English.

The pontiff also said he was looking forward to the World Meeting of Families.

He landed at Dublin Airport on board Alitalia flight AZ4000 from Rome, shortly after 10.25am.

Thousands of people from across Donegal have made the journey to Dublin to attend the Pope’s appearances at both Croke Park and the Phoenix Park.

Others who do not have tickets to these events are hoping to catch a glimpse of the pontiff when he is driven around Dublin in the ‘Pope Mobile’ later today.

Just minutes before touching down at Dublin Airport, Pope Francis said “For me it is the second meeting of families. I was in attendance at the Philadelphia meeting,” he said.

“Secondly, and it touches my heart, I am returning to Ireland for the first time in almost 28 years,” he added.

“I stayed for almost three months in Ireland when I was studying English (in 1980).”

He said he has special memories of his time in Ireland and is delighted to return.

In keeping with tradition, Pope Francis walked through his aircraft to personally greet journalists he had never met before.

The Pope does not take questions at this point in his Irish visit, holding a special press conference on his flight back to Rome on Sunday night.

Pope Francis was formally greeted at Dublin Airport by the Tanaiste Simon Coveney before being escorted to Aras an Uachtarain for a formal meeting with President Michael D Higgins.

He will then attend a special State reception at Dublin Castle before visiting St Mary’s ProCathedral and the Capuchin Day Centre.

The address by Pope Francis at the World Meeting Of Families rally in Croke Park tonight will be the highlight of the week long festival.

Before the pontiff’s arrival, a massive security operation was underway in the west apron area of Dublin Airport.

Pope Francis later descended the steps onto Irish soil as a strong breeze blew, and was greeted by a long line of dignitaries and also Jessica Coveney (7), daughter of the Tanaiste and his wife Ruth, who presented him with flowers.

“I’ve very happy to be here,” the pontiff said as he received the bouquet.

Pope Francis arrives in Ireland and says he is delighted to be back was last modified: August 28th, 2018 by Stephen Maguire
Facebook0Tweet0LinkedIn0Print0
Tags:
Croke ParkdublinPope Francis