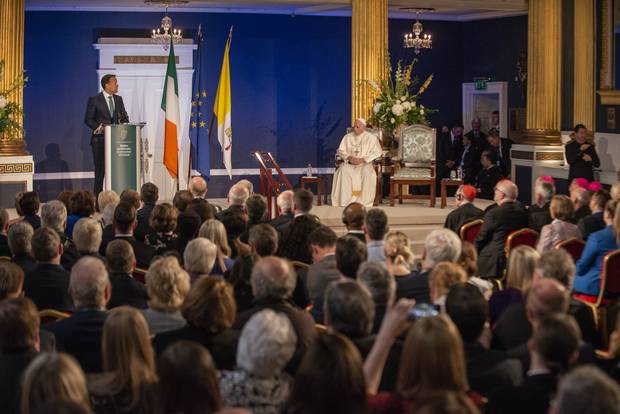 The Pope has said that measures must be taken in response to the “betrayal of trust” and “repugnant” abuse inflicted on abuse victims in Ireland.

Speaking at Dublin Castle, Pope Francis said the Catholic Church must work to “remedy past mistakes and to adopt stringent norms meant to ensure that they do not happen again”.

Speaking in front of Taoiseach Leo Varadkar, he also risked made a brief reference to the abortion referendum.

He questioned whether a “materialistic ‘throwaway culture’” has made people “increasingly indifferent to the poor and to the most defenceless members of our human family, including the unborn, deprived of the very right to life”.

However, the Taoiseach told the audience that Ireland has “voted in our parliament and by referendum to modernise our laws – understanding that marriages do not always work, that women should make their own decisions, and that families come in many forms including those headed by a grandparent, lone parent or same-sex parents or parents who are divorced”.

He added: “Holy Father, I believe that the time has now come for us to build a new relationship between church and state in Ireland – a new covenant for the 21st Century.

“It is my hope that your visit marks the opening of a new chapter in the relationship between Ireland and the Catholic Church.”

Pope Francis went on to praise those who worked to bring about the Good Friday Agreement and 20 years of peace in Northern Ireland.

However, most attention was a section of his contribution – made in Italian – where he acknowledged how the Church had failed the “most vulnerable”.

“I cannot fail to acknowledge the grave scandal caused in Ireland by the abuse of young people by members of the Church charged with responsibility for their protection and education,” he said.

“The failure of ecclesiastical authorities – bishops, religious superiors, priests and others – to adequately address these repugnant crimes has rightly given rise to outrage, and remains a source of pain and shame for the Catholic community. I myself share those sentiments.”

The Pope praised his predecessor, Benedict XVI, who he said “spared no words in recognising both the gravity of the situation” and made “frank and decisive intervention”.

Pope Francis said the Church in Ireland “past and present” has played a role in promoting the welfare of children.

“It is my hope that the gravity of the abuse scandals, which have cast light on the failings of many, will serve to emphasise the importance of the protection of minors and vulnerable adults on the part of society as a whole.

“In this regard, all of us are aware of how urgent it is to provide our young people with wise guidance and sound values on their journey to maturity,” he said.

Mr Varadkar said the Church was meant to be a place of charity, forgiveness and compassion – but “far too often there was judgement, severity and cruelty, in particular, towards women and children and those on the margins”.