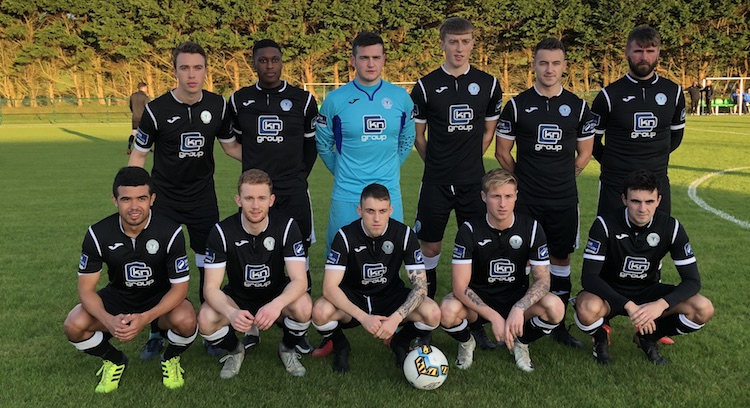 The Diamond Park sparkled beneath an impressive glow as a new era in Donegal soccer was ushered in on a night when the Donegal League HQ hosted its first ever floodlit game.

by Chris McNulty at The Diamond Park, Ballyare

It was surely a proud night for the Donegal League’s executive members and the likes of former committee members like Dessie Kelly and Fr Michael Sweeney, who had been instrumental in the purchase of this six-acre site for a princely £9,000, 35 years ago in 1983.

McCourt gave Harps the lead in the 23rd minute, as his shot from just outside the box squeezed in at the near post, past Donegal League goalkeeper Michael Mullen.

McCourt was featuring for the first time in two months, having picked up a groin injury in the 1-0 win at Cabinteely, and the sight of the ex-Celtic winger on the pitch again for the first half will have been a welcome boost for Harps fans ahead of their promotion run-in.

McGinley netted 13 minutes into the second half, the Strabane man neatly picking his spot after taking receipt of a clearance.

The Diamond Park has undergone a €300,000 redevelopment to include a new sand-based pitch, surrounded by four imposing floodlights, with new dugouts and fencing also included in the works. 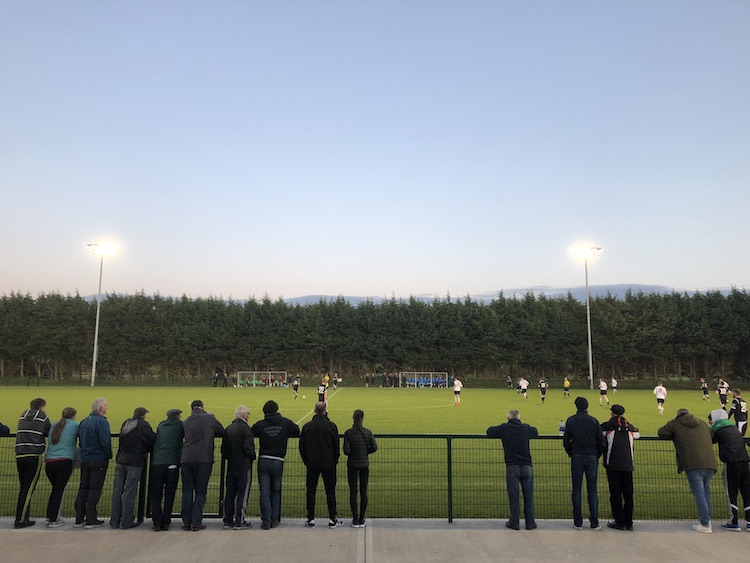 Harps included only two players – Mark Timlin and Sam Todd – who had started Friday night’s 2-0 win over Galway United at Finn Park; a win that secured them a place in the promotion play-offs.

With no game this week Harps used the game, nine days before a crucial trip to title-chasing UCD on Friday-week, to experiment and had in their side two trial players, whose names were listed on the team-sheet as John Francos and Jake Mecade, though their identity was kept as a closely-guarded secret by Harps.

There was also a first Harps outing for former Irish schoolboys international Fintan Borotto, a summer signing, who had yet to appear for the club.

McCourt, taking a shot free from Jesse Devers on the edge of the area before putting his men in front.

Devers might have done better with a chance late in the opening period, but Ryan Shields came in with a timely challenge with the Harps attacker taking much too long to have a go after getting onto Todd’s long ball.

The Donegal League have ambitions of a lasting run in the Oscar Traynor competition this season. The game represented a first outing for new manager Raymond Shields, who was missing several members of his squad. 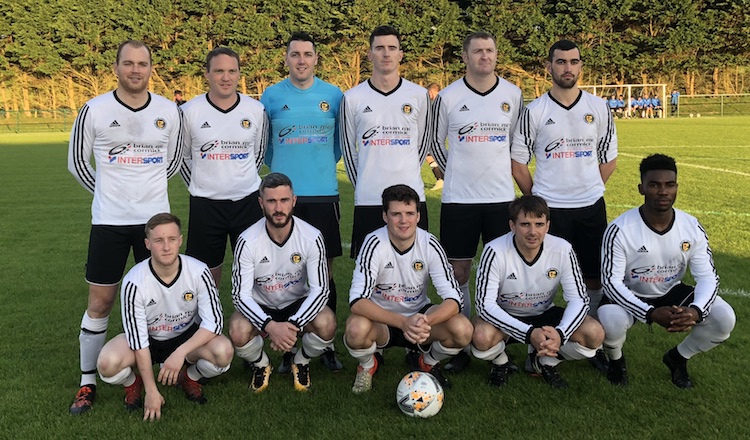 William Lynch flashed a header wide early on as the Kildrum hitman just couldn’t get a proper connection while his club colleague Gareth Colhoun drilled from distance into the arms of Harps’ captain-for-the-night Peter Burke.

At the other end, Adam Duffy was denied by Chris O’Donnell and Mikey Place’s follow-up was well blocked by Kieran Gorman.