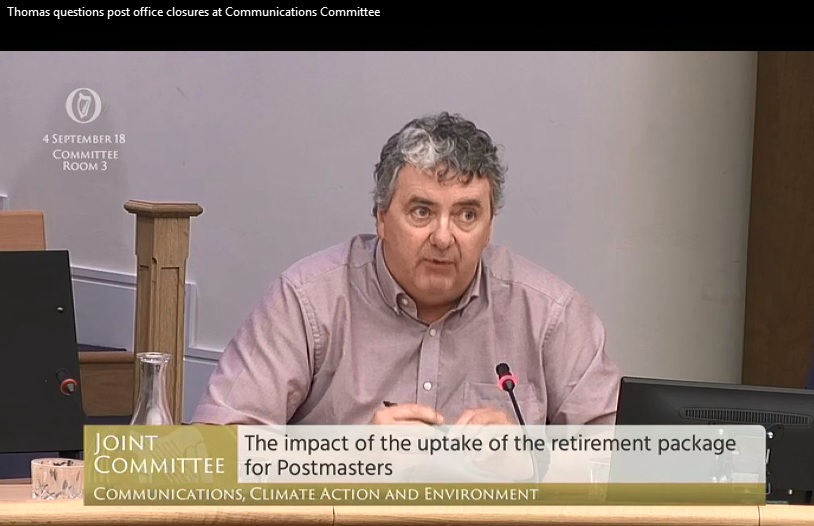 Independent TD for Donegal Thomas Pringle has claimed that Fine Gael and Fianna Fáil’s anti-rural legacies are to blame for post office closures in Donegal.

Pringle TD has put questions to the Minister for Communications and CEO of An Post this week over the closure of post offices across rural Ireland.

Deputy Pringle sought to establish to what extent the Government made efforts to avert the series of post office closures recently announced which will see over 159 post offices closed across rural Ireland and 17 in Donegal alone.

The answers, according to Deputy Pringle, revealed Fine Gael’s lack of investment in the post office network from day one and their continued progression of Fianna Fáil’s legacy of anti-rural Ireland policies which have undermined the existing post office network.

Deputy Pringle said: “It’s clear that Fine Gael is continuing on what Fianna Fáil started. Between 1999 and 2011 over 700 post offices were closed down while Fianna Fáil was in power. That is an extraordinary number and a clear indication of the anti-rural Ireland sentiment that exists in both establishment parties.

“Answers to my questions at the Communications Committee confirm that the all- Government approach to the post office network has been to put the cart before the horse.

“I questioned why the Government was providing additional services to Postmasters who escaped the recent spate of post office closures rather than providing them to all postmasters before the closures were announced. It would make better sense to provide the tools and supports necessary to help sustain the network before actively undermining it further only to offer supports afterwards.

“The Government has it completely backwards when it comes to rural Ireland. Donegal has the second highest number of post offices to close under the recent decisions by An Post. It’s proof that the viability of Donegal towns and villages continue to be targeted by the policies originally established by Fianna Fáil and which are being pursued by Fine Gael over the course of their Partnership in Government.

“The attack on rural Ireland will not end here while these policies remain and there’s no doubt that the future of post offices remains uncertain,” concluded Pringle.