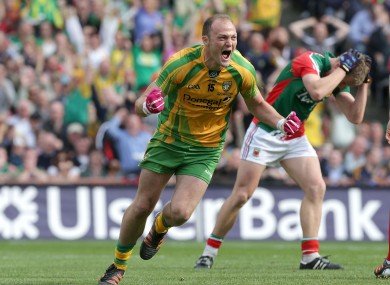 Colm McFadden is facing a race against time – and a knee injury – if he is to play any part in St Michael’s championship bid this year.

The former Donegal star will be a definite absentee when St Michael’s take on neighbours Termon in their Championship opener at The Burn Road on Saturday evening.

McFadden has not played much for St Michael’s this year and admits that he is unsure about his participation.

“I’ve been carrying a knee injury for the last couple of months so I don’t know how much championship football I’ll play,” McFadden said.

“Saturday will come too soon. We’ll see about the other games.

“It’s hard watching – especially when the weather’s good and championship football is on. I’d definitely prefer to be togged out.”

St Michael’s have been paired with Termon, Four Masters and Malin in the group and McFadden’s blunt assessment is that the Creeslough-Dunfanaghy men have to get a new blueprint.

He said: “It’s obvious we need to do something different because anything we’ve done over the last number of years hasn’t been good enough. We haven’t got over the line. We have to improve on everything.”

St Michael’s were beaten finalists by Glenswilly in 2011 and have been to a couple of semi-finals.

Saturday takes them to the unpredictable Termon and an away clash at The Burn Road could certainly provide some sparks.

McFadden said: “We’d be hoping to get a result on Saturday because we’ll be under pressure if we don’t.”