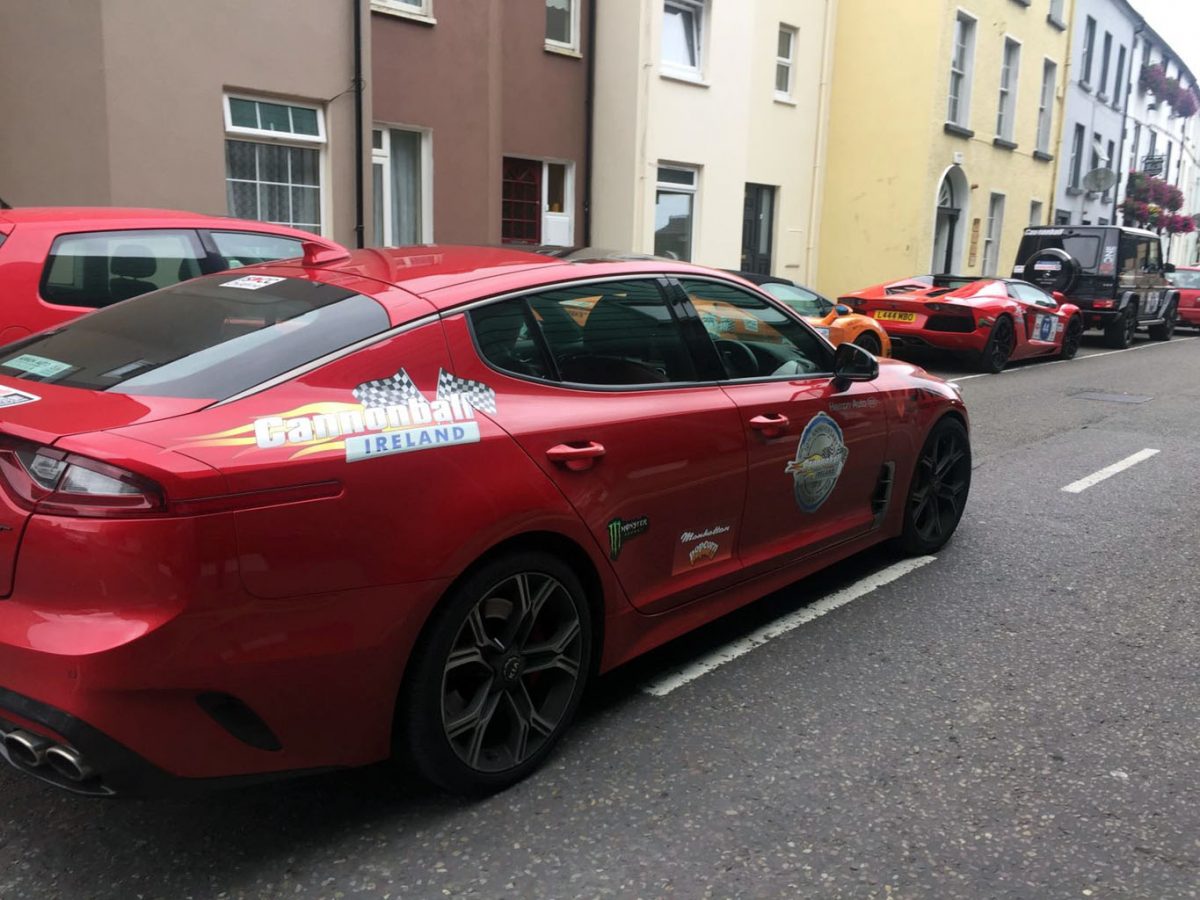 DD Motoring: A real ‘Stinger’ in the tail from Kia

This week our motoring columnist Brian McDaid discusses the new and impressive Stinger from Kia, which he had a chance of testing last week.

A north-south facing three-litre engine and a petrol V6 with twin turbos pumping out 370 BHP, matched up to a eight-speed automatic gearbox, complete with finger flaps to switch to manual if desired, driving the power through a drive shaft onto a limited slip differential through a rear axle onto the tar, if I told you that this was the spec of the Kia I drove this week you would take some look at me.

Muscle cars and the car maker Kia just don’t sound right in motoring circles but in Donegal Town this week it was the Kia badge that came to the rescue when the Cannonball run rolled into town.

While everyone was out trying to spot a Ferrari, Lamborghini, McLaren, Mercedes-Benz, Beamers and even a Pope carrier, rattling the roof slates as he or she rumbled through the Diamond to stop at the newest location in Donegal Town, Supermac’s, who were hosts for refreshment and refuelling. 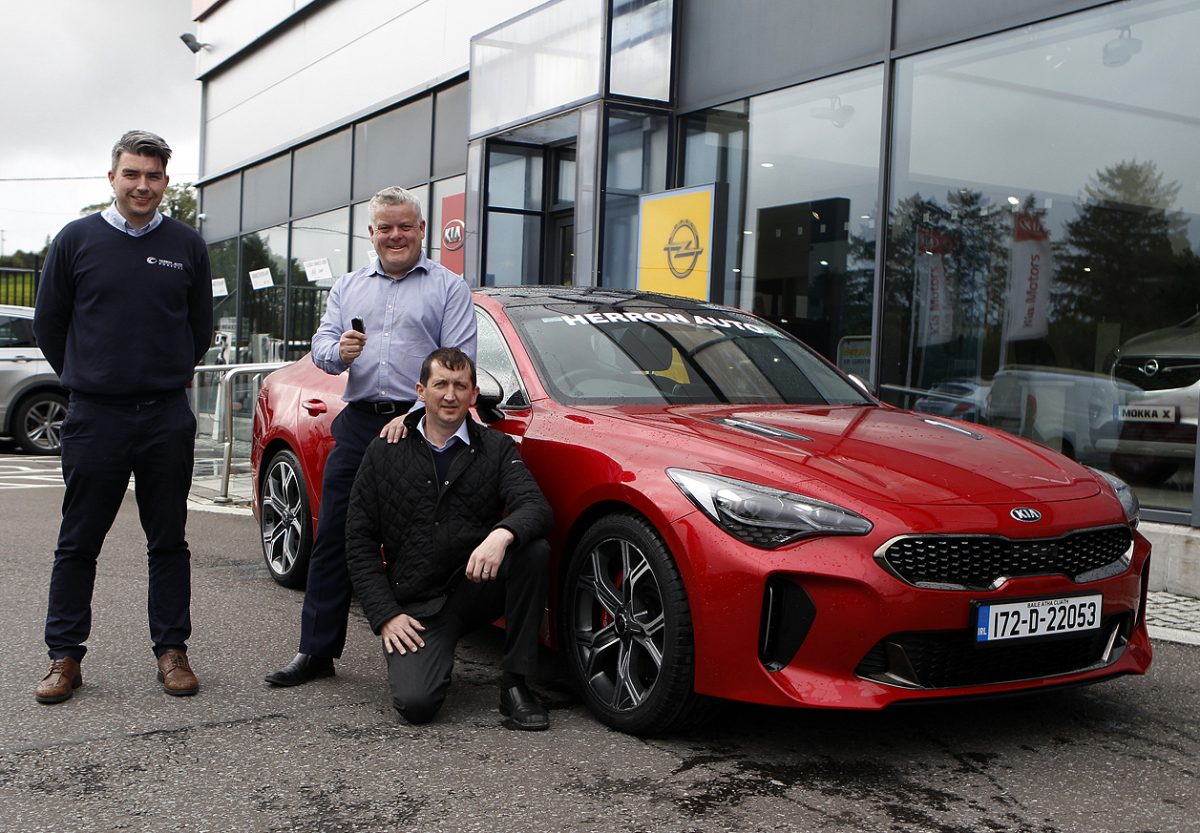 Owen Anderson and Alan Herron from Herron Autos Donegal Town pictured with Ken Foley owner of Supermac in Donegal Town as he retuned the beautiful Kia Stinger GT which he completed the Canonball run on at the weekend. Photo Brian McDaid

Ken Foley, who brought a welcome injection of investment, through the Supermac’s, brand to Donegal, he is also into his cars and was looking forward to taking part in the Cannonball run in his beautiful American Ford Mustang.

At the very last minute, his V8 powered classic threw the toys out of the pram and developed a slight rattle in the engine. So Ken decided not to chance driving the car on the supercar fundraising event around Ireland.

You shall go to the ball, the canon-ball!

With an entry in for the Cannon Ball run, Ken went in search of a replacement supercar for the event. Call it serendipity or whatever but the man who decided to set up his new business in Donegal Town ended up finding a supercar in that same town, thanks to Herron Motors, who are the local Kia dealer. They came to the rescue and located one of the Kia Stinger GT’s from Kia Ireland, which was the car that Ken Foley ended up doing the Cannonball run in last weekend. 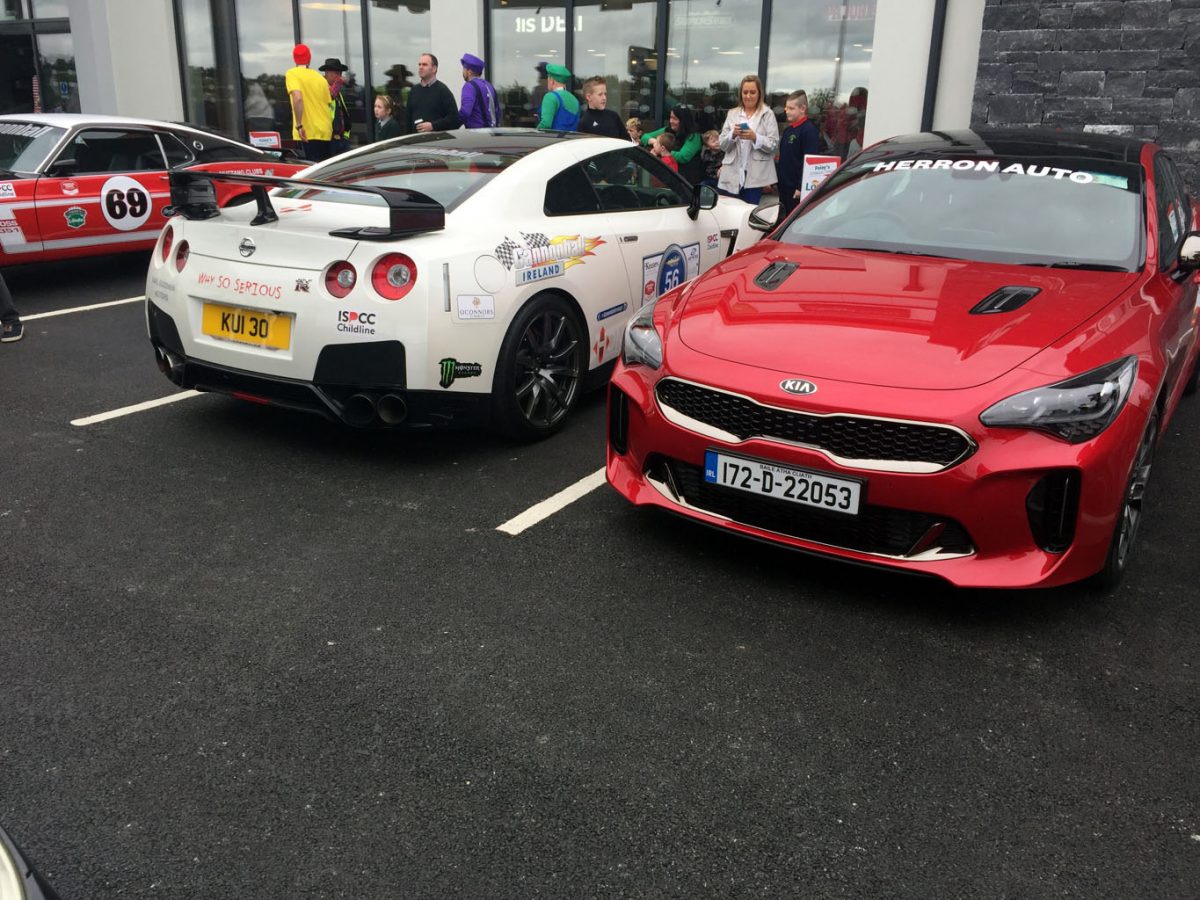 The Kia Stinger GT which came to the rescue of the Cannonball run at the weekend.

Ken Foley was still buzzing on Tuesday afternoon when Donegal Daily met up with him as he reluctantly returned to Herron Motors with the Stinger GT. He had an amazing time in a great car. He didn’t expect so much interest from other competitors on the Cannonball run over the weekend but the Kia was stealing the show at times.

With its power plant pushing towards the 400 brake horsepower mark and weighing in at €66,000 for this high spec model trimmed out in the finest of matching red leather. 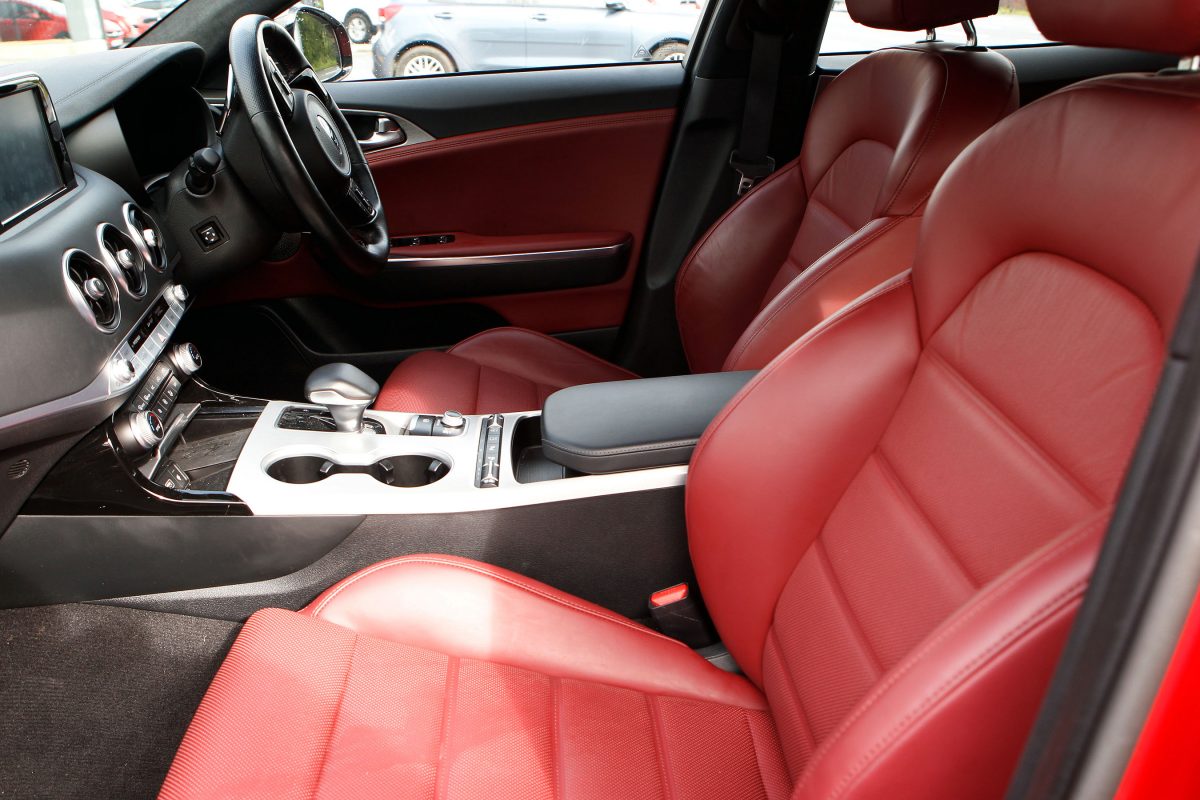 The beautiful interior of the Kia Stinger GT which we drove this week. Photo Brian McDaid

The Stinger GT is the showpiece in Kia’s range, On Tuesday this week when we arrived at Herron’s for our turn for a spin in the GT we nearly ended up test driving an identical looking red 2.2 diesel version of the same car, which is presently on demo in Donegal Town.

When we did manage to wrestle the key from its last driver of the V6 petrol version, Mr Foley, we were off for a spin and a photo shoot.

The roar in sport mode of this power V6 twin-turbo just calls out for you to give it the gas.

My road of choice to enjoy this brilliant car was a trip up an old road from Laghy through Bridgetown to Ballintra, which runs parallel to where the new road runs between Donegal Town and Ballyshannon.

Having the benefit of chatting with Ken Foley about the Cannonball run and how well the car did both in performance and upstaging cars twice or three times its price.

I just wanted to enjoy the car on a winding road that I travelled along years before with my elbow out the window listening to the purr of the beautiful V6 and the auto gearbox knocking down a gear at the slightest press on the throttle. (The simple joys of a motoring correspondent) 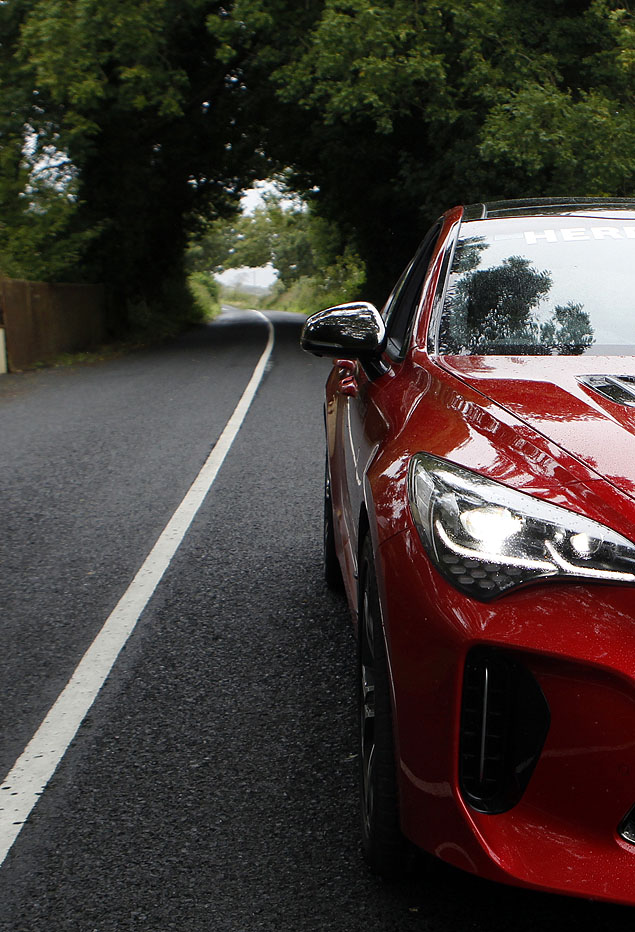 Laghy Blast – from the past. Winding roads in the company of an amazing car from Kia this week. Photo Brian McDaid

There is a place along that old road from my childhood where big old trees formed a roof over the road. I pulled up in this beautiful car and captured this landmark in the background.

Back in the day, my father figured that when we went through the trees we were halfway through our journey between Letterkenny and Sligo.

This car looked as stunning in this nostalgic memory of mine as it did besides the statue of Red Hugh O’Donnell on the pier in Donegal Town.

On the way back we took the new road and the car was assisting me in the steering and letting me know when I drove over the cat eyes along the road. it even steered itself around the corners but after a while, it would ask me to put my hands back on the steering wheel. 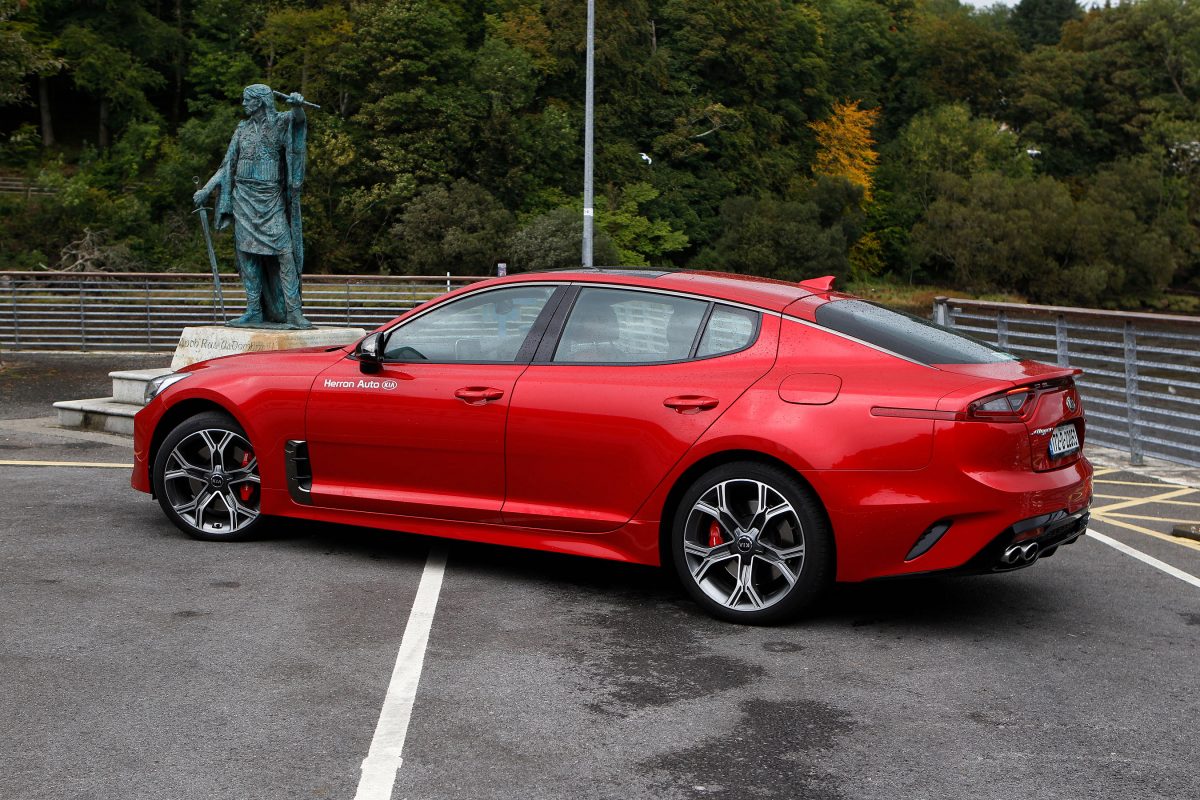 What a team, Red Hugh O’Donnell and the Red Stinger GT in Donegal Town this week. Photo Brian McDaid

This Kia Stinger GT, like the Cannonball run around Ireland which it took part in at the weekend, gives you something different from your everyday routine. I had a ball for the small time I drove it this week, and hope in the future to also try out the identical looking diesel version.

Ken Foley also had a ball in the Kia and also received great news that his mystery rattle in his Mustang was only minor, a valve on one of the big carburettors was the cause and was easy curred.

Win a stinger for a weekend.

If you fancy a drive in the Kia Stinger for yourself why not enter the competition on Facebook and Instagram from Kia Ireland and its network of dealers to be in with a chance to own a Stinger for a weekend for the forthcoming October break. 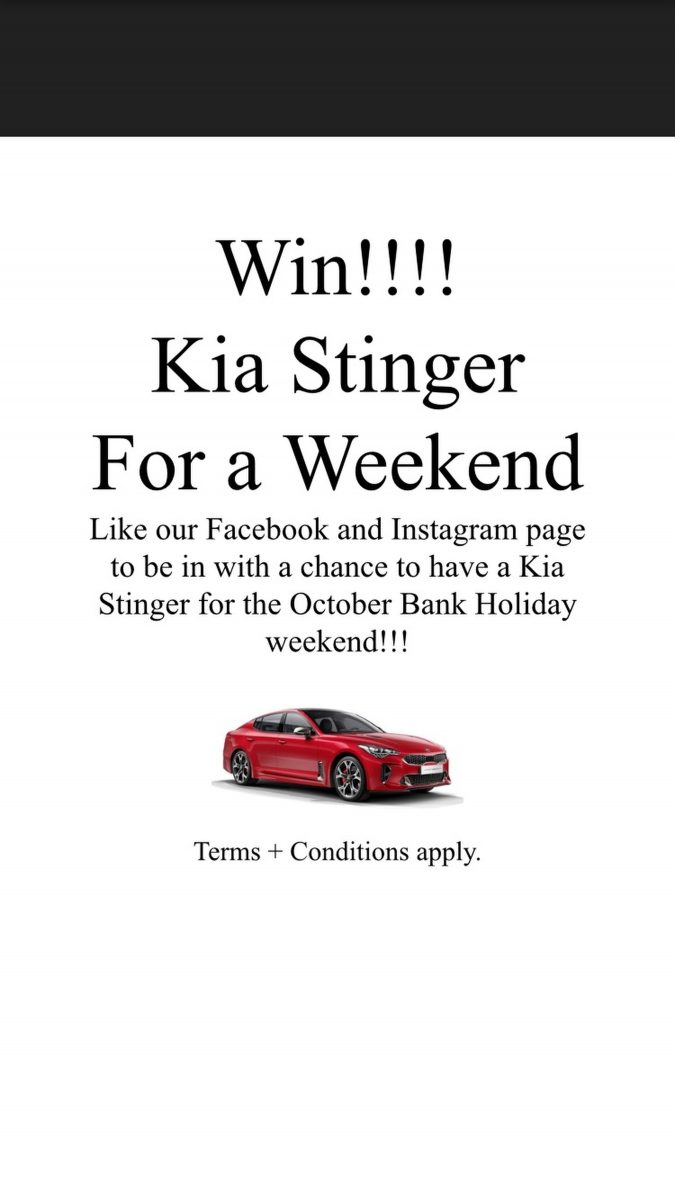 A chance to win a stinger for the weekend.