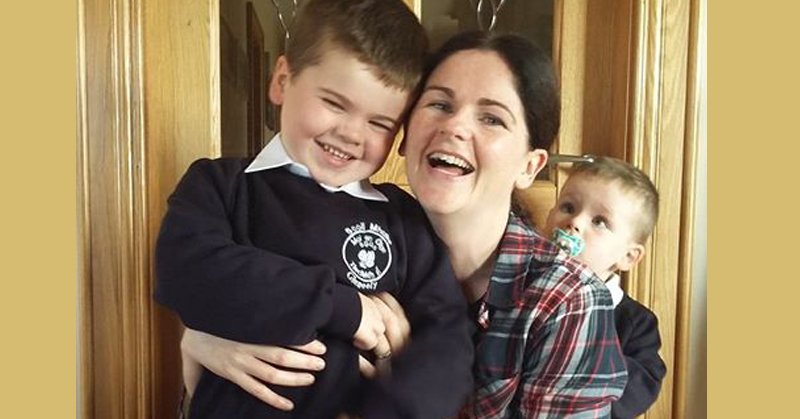 Fighting Lyme Disease: ‘For the last 11 years I was just surviving. Now I am living.’

A Donegal woman with Lyme Disease is calling on local people to take action to raise awareness of the illness at a government level.

Emma Doherty from Gleneely has had a new lease of life this year after being diagnosed with Lyme Disease after 11 years of pain and mystery illness.

It was only after Emma uncovered the cause of her debilitating symptoms that she could begin treatment and build up her health and energy again.

Emma said: “For the last 11 years of my life I was just surviving. Now I am living.”

“Life is amazing,” she adds, having been able to get her eldest son ready for primary school this September.

Over the summer Emma says she has helped 36 people find answers to their own illness with a diagnosis of lyme disease/coinfections. She has given out 60 blood tests to people on both sides of the border who contacted her after she shared her story.

But Emma states that more must be done to improve testing and treatment in Ireland.

Emma said: “The testing in Ireland is totally unreliable and inadequate. It misses 70% of patients.

“The majority of the people I helped were previously tested for Lyme Disease in Ireland. Some were tested twice. All were given a false negative.

“All of them were misdiagnosed with a range of chronic auto-immune diseases including fibromyalgia, chronic fatigue syndrome, rheumatoid arthritis, colitis, POTS and Lupus to name a few.

Emma said: “Newly qualified doctors only receive one hour of a seminar on tick borne illnesses. Clearly this is not enough.”

The Lyme Disease Awareness Rally takes place on Wednesday 26th September at 11am outside Leinster House in Dublin. The event organised by Tick Talk Ireland seeks to have this disease recognised by the HSE.

“The Irish government need to plough money into improving the Irish tests in line with our German counterparts in Armin Labs. Currently these tests are paid privately by patients costing anywhere from €300-600. Currently these results are not accepted by your GP. Currently there is only one doctor in Ireland who is treating patients based on these results. Again this is all private. Waiting time is at least 2 months. How can families afford this?

“Many Irish lyme disease patients have had to go abroad in an effort to regain their health, travelling to places such as Germany, Poland, America, Switzerland and Cyprus – forking out on average €50,000 on treatment.”

Emma, who has two young boys, says the health of children must be considered as campaigners battle for better awareness, prevention and treatment of Lyme Disease.

Emma added: “Your children are the reason why we work so hard in order to provide for them and to give them the best possible future. What kind of a future would your child have if things stay the same?”

Note the poster below from www.ticktalkireland.org on Lyme Disease prevention and detection.

Fighting Lyme Disease: ‘For the last 11 years I was just surviving. Now I am living.’ was last modified: September 24th, 2018 by Rachel McLaughlin