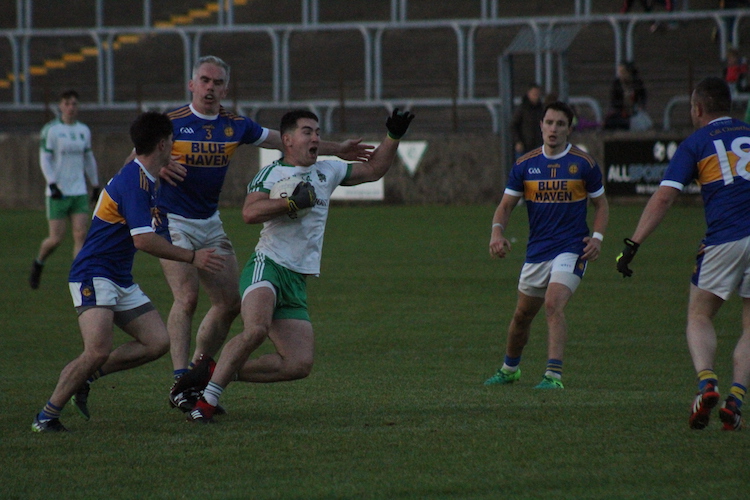 Both through, but Kilcar march on as group winners after win over MacCumhaills

Kilcar secured top spot in Group D of the Donegal SFC as Eoin McHugh’s second-half goal got them safely past the also-qualified Sean MacCumhaills.

Kilcar had three big goal chances before McHugh found a way in the 45th minute.

It was an attack that was Kilcar at their deadly best and McHugh’s superb finish gave Eoin Gallen little chance of making a save.

It was to their eternal credit that MacCumhaills – who went over half-an-hour without a score – kept up the fight.

Bernard McGeehan’s team had already booked a quarter-final slot by virtue of their wins over Milford and Killybegs and they hit six points in succession to inch a little closer.

Even at that, it was still a pretty comfortable win for the defending champions and Andrew McClean’s late score gave Kilcar a five-point win.

After McClean and Mark McHugh posted early scores for Kilcar, MacCumhaills stole a march with the game’s opening goal in the seventh minute.

Patton off-loaded to Oisin Gallen on the right-hand side and it was Patton who was on hand to steer home at the far post from Gallen’s lofted ball across goal.

Captain Steven O’Relly drilled over a point immediately after and it was as if the hosts were throwing down the gauntlet.

Kilcar were without Stephen McBrearty, following his red card in last week’s home win over Milford. His absence, along with those of cruciate victim Patrick McBrearty and concussion-suffering Ryan McHugh, left the champions down three of their leading lights.

They almost shot the lights out here inside 150 seconds of the throw-in.

There were only seven seconds gone when Eoin McHugh scurried through, but fired his shot wide of Eoin Gallen’s goal.

Soon after, Kilcar galloped in again, but the crossbar shuddered as Ciaran McGinley thumped his attempt at the goal-frame.

Patton’s goal kept MacCumhaills in front by the most slender of margins until Kilcar hit four-in-a-row to take command. Ciaran McGinley – who had been a pre-match doubt – steered over twice with Matthew McClean and Mark McHugh raising flags to give Kilcar a 0-10 to 1-4 lead by the interval.

MacCumhaills, with their passage into the quarter-finals already safe, opted not to risk Aaron Kelly, who netted a hat-trick in last weekend’s win over Killybegs, and Darren O’Leary was another who remained in a tracksuit with risks unnecessary at this stage.

Conor Doherty stretched the lead for Kilcar early in the second half with a brace of points.

Those scores came either side of another goal chance for the visitors. A rapid exchange of passes through the hands concluded with Odhrán Doogan being denied by MacCumhaills ‘keeper Eoin Gallen.

Kilcar did finally get the goal they craved when Eoin McHugh cracked past Gallen in style and Kilcar were home and hosed.

MacCumhaills ended a barren 32-minute spell when Oisin Gallen stroked over a free.

The night was darkening and the minds already turning to the quarter-finals by then with the names of both teams into tomorrow evening’s draw.

Both through, but Kilcar march on as group winners after win over MacCumhaills was last modified: September 22nd, 2018 by Chris McNulty

Here’s who Donegal will be without against...

Listen: Bonner upbeat despite a stack of...