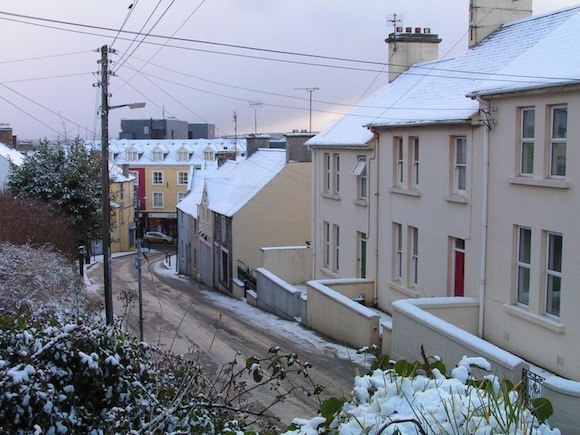 Dr. Pauline Holland will officially open the festival in the Donegal County Library on Friday 19th October at 7pm and will give a short visual presentation about the poetry of Donegal weaver, Sarah Leech. There will also be some entertainment from the Letterkenny Caledonian Pipe Band.

Following the official opening, in association with The Schubert Sessions and the Donegal Chamber of Music Society, as part of the 5th Donegal Chamber Music Festival, there will a live performance in Conwal Parish Church at 8.30pm.

Tickets cost €10 and are available at the door.

On day two of the Cathedral Quarter Literary Festival, on Saturday 20th October, there will be a tour of the Jane Austen associated sites in Gweedore which will be led by Dr. Sophia Hillan, author of ‘May, Lou and Cass: Jane Austen’s Nieces in Ireland’. On the tour, Dr Hillan will discuss the remarkable story of Jane Austen’s nieces, Marianne, Louisa and Cassandra Knight in the places where it happened. Booking is required for this event and a bus will leave Dillon’s Hotel, Letterkenny at 9am and will return from Gweedore at 1.30pm. Cost of bus is €15 but will include tea & sandwiches.

Sean Hillen https://www.seanhillenauthor.com will also coordinate a Creative Writing Workshop on Saturday from 2 – 4pm in Dillon’s Hotel. In this practical, hands-on workshop, Sean will discuss the importance of questions in the development of strong story-lines and intriguing characters. Cost of workshop is €5 and booking is essential.

On Sunday 21st October, there will be a re-enactment of the Letterkenny Rabble by the Hiring Fair Play on the Church Lane at 1pm.

A bilingual play which has been adapted from the Evelyn Cullen short piece ‘It’s a Long Road to the Laggan’, it will tell the sad story of a father and son who walk from West Donegal spending the night in Church Lane before being hired out the following day at the ‘Letterkenny Rabble’. Directed and lengthened by Joe Dowling.

At 3pm the Donegal Chamber Orchestra will perform at Conwal Parish Hall. The closing concert of the 5th Donegal Chamber Music Festival will include music by Handel, Joan Trimble (CMC) plus works by Hubert Parry and Debussy to commemorate their centenaries. Admission is €10/€5 at the door.

The official closing of the Cathedral Quarter Literary Festival takes place on Sunday 21st at 4.30pm in the graveyard of Conwal Parish Church with as Jane Austen, visiting the graveside of her niece Cassandra Knight and her husband Lord George Hill. Written and performed by Maura Logue Dark Daughter Production and Vintage Hire.

As part of the Cathedral Quarter Literary Festival there will also be a photo exhibition in the Donegal Central Library by Maciej Wysocki. The photo exhibition will open on Friday 19th October at 2pm and will run until Friday, 26 October.

Donnan Harvey, Cathedral Quarter Secretary, said: “We’re really looking forward to the third annual Cathedral Quarter Literary Festival. The committee has worked very hard to pull this event together and we’re very excited to share it with the public. We’ve a very busy programme of events happening throughout the Cathedral Quarter and Letterkenny from Friday 19th to Sunday 21st October and we’re hoping for a great turn-out. Huge thanks must also be paid to our kind sponsors including the Castle Grove Country House, Dillon’s Hotel and Kinnegar Brewery.”

The festival has been funded from the Members of Letterkenny Municipal of Donegal County Council Development Fund Initiative and from Bord Failte Small Festivals Grant.