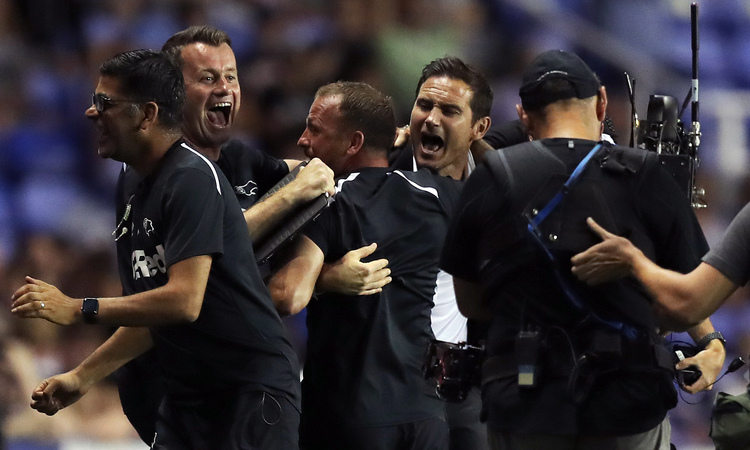 Shay Given took immense pride as Derby County defeated Manchester United on penalties in the Carabao Cup third round on Tuesday night.

Given is now the Head of Goalkeeping with Derby and saw ‘keeper Scott Carson save from Phil Jones in the shoot-out to seal a famous win for the Rams, following a 2-2 draw at Old Trafford.

Given was recruited by new Derby boss Frank Lampard this summer.

Derby are just two points off top in the Championship and will be energised by Tuesday’s win ahead of Saturday’s game against Bolton Wanderers.

“In general, we’ve been OK but in the last couple of games, we’ve really clicked and especially at Brentford (a game Derby won 3-1) last weekend,” Given said.

“The first hour of the game we were fantastic.

“So we went to Old Trafford with loads of confidence after the game at the weekend and it’s still a difficult task. Man United have got a team of full internationals.

“It’s not an easy game but we felt going into the game, if we play like we played against Brentford last weekend, then we’d give ourselves a chance.”

Given was on holiday when Lampard text to begin a conversation that led to Given cutting short his break in the sun to take up his new role.

Given has done some punditry alongside Harry Redknapp – Lampard’s uncle – and believes that was a factor in Lampard coming calling.

It is a first coaching role for the Lifford native.

“We’ve tried to change that and we’re trying to play out from the back and play through different lines,” he said.

“We’ve got a few talented players as you saw like Mason Mount and Harry Wilson, who got a fantastic free-kick. We’re getting players into positions where they can drop in between defence and midfield and pick up them gaps where it’s difficult for people to pick them up.

“We showed the video before we even played Man United about how well we played against Brentford in them different situations.

“And we felt Man United, when we were watching the Wolves game and watching clips of them, that there were areas that we could exploit and I think we did that last night.”

Given feels as if he is more than just a goalkeeping coach.

He said: “I’m part of a new team and we’re trying to get the best out of the players. What excited me as well was my input about everything. We come together as a group and we talk about things. We’ve got a coaching staff office and a lot of it happens in there. It’s great to be part of it and Derby’s a fantastic football club.”