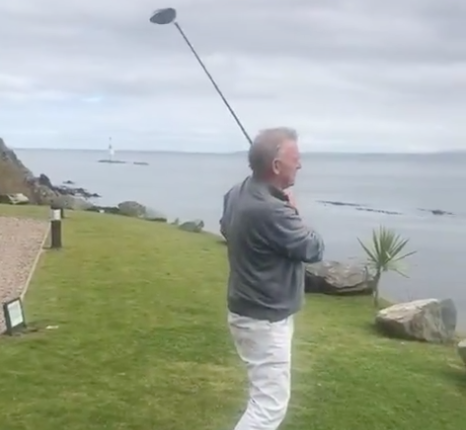 Presidential candidate Peter Casey has received backlash for a video he posted on social media in which he drives a golf ball into Lough Foyle.

In his tweet, Casey seemed to imply that if he is elected he will not need the service of an official driver saying, “This is the only driver I’ll be bringing to the Áras when I get elected”, before striking the ball.

The Dragons’ Den star secured the last of the four required council nominations earlier this month and is now in the presidential race.

Possibly drawn into the Ryder Cup frenzy this weekend, many users were quick to point out that it can take a non-biodegradable golf ball up to 1,000 years to decompose.

Good man. Drive another bit of plastic/elastic into the ocean why don’t you!!! #eejit @Ballynamona

“It takes between 100 to 1,000 years for a golf ball to decompose naturally”(CNN) So, Casey, WHY pollute? @CaseyPeterJ #aras18 #damndragons

You remind me to much of @realDonaldTrump #golf pic.twitter.com/HYaBv5H2pz

That’s not funny, unless it’s biodegradable it’s a deliberate act of pollution in a publicity stunt by a presidential hopeful. #WildAtlanticWay #Donegal #pollution

Ahh a former reality TV personality who wants to be president, live in a big White House and play golf. What could possibly go wrong?