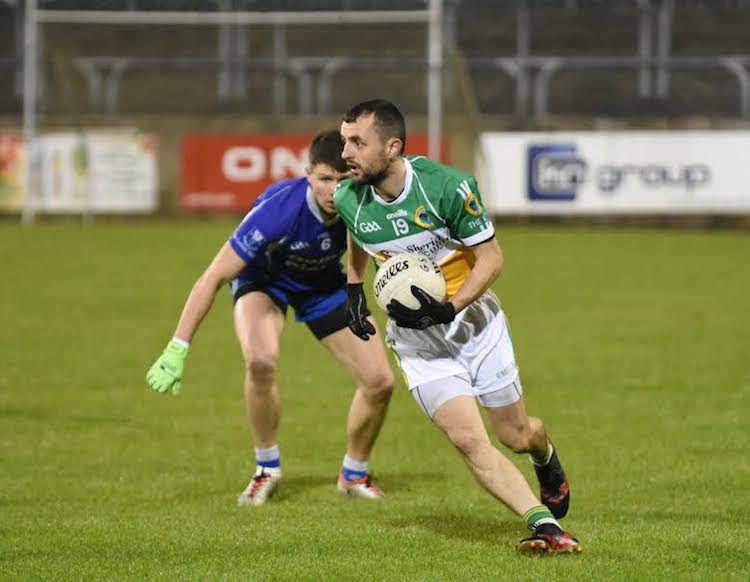 Unimpressive and all as they might have been again, Glenswilly are just one hour away from a sixth Donegal SFC final and imposing they stand.

It is in these moments and weeks where they can be at their deceptively dangerous best, too.

Picture: Kealan McFadden on the attack for Glenswilly against Four Masters. Picture by Geraldine Diver.

In the teeming rain, they saw off a battling Four Masters, whose cause was washed away when four-time All-Star Karl Lacey was sent off 15 minutes from the end.

Glenswilly were content enough that they had enough done here, but will have to find some higher gears over the coming weeks if they’re to keep their charge going for a fourth Dr Maguire.

At times they were wasteful and shot selection was questionable at times, but as their manager Brendan Walsh pointed out beforehand: “We want to be still in the hat on Sunday evening. We don’t care how we do that.”

They remain a side that few would fancy being paired alongside them tomorrow in the semi-final draw.

It took Four Masters 19 minutes for Thomas McGowan to slot over a free that would be Four Masters’ only score in the first half.

Aaron McCrea drilled over from distance for their first point from play in the 40th minute and even though they were within five, Glenswilly remained in charge. That score from McCrea, a wonderful effort in the drenching conditions, would be their sole score from play for the duration.

Four Masters’ hopes wee dashed when 2012 Footballer of the Year Lacey was shown a straight red card for a strike on Oisin Crawford.

Glenswilly went 20 minutes without a score in the second half, but Caoimhin Marley ended that famine to open the five point lead again after Neil Ward’s free had just four in it.

Brian Farrelly, picked out by a majestic diagonal ball from Michael Murphy, had a late sniff of a goal, but his shot was well blocked. Murphy stroked over the ’45 with a shrug of the shoulders that sealed a seven-point win.

Four Masters staged a stirring comeback last weekend to come from 14 points down against Termon. They ended up losing by two points, but an opening day win over Malin, alongside that narrow loss, proved enough for them to go through.

The Donegal Town men were missing veteran Barry Monaghan, who got married today.

And the loss of Kevin McBrearty, who lined out for Donegal earlier this year, was a significant blow for the Tir Chonaill Park residents. McBrearty was sent off in that frenetic contest against Termon last time around and a subsequent appeal to the Donegal Hearings Committee bore no joy.

Glenswilly raced four points up inside the opening eight minutes.

Brian Farrelly opened the scoring after 80 seconds and, even in those early moments, there was a sense that Glenswilly were going to have too much.

Shaun Wogan bagged the crucial goal last Sunday as Glenswilly overcame Burt to seal their passage to the last eight.

Wogan might have been celebrating again when he got on the end of a dropping ball in by Oisin Crawford midway through the half, but he batted into the hands of Martin Cassidy.

Murphy (free), Mark McAteer and Caoimhin Marley tacked on points to give Glenswilly a 0-7 to 0-1 lead at the break.

Glenswilly were content to do just enough. The bottom line is their only concern at this point.