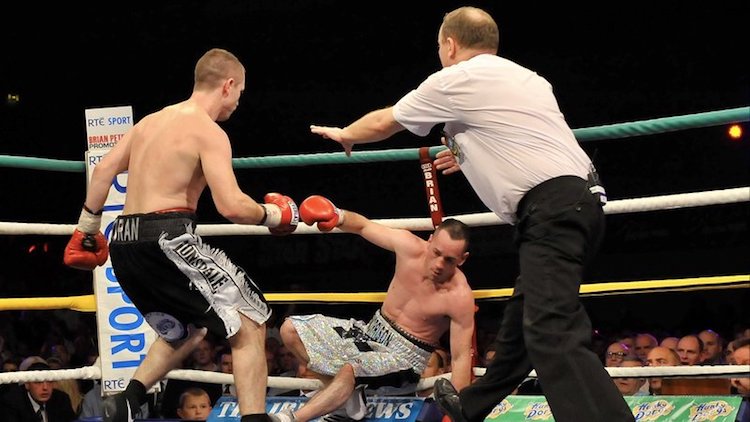 Could pro boxing be set for a return to Letterkenny?

Letterkenny could be set to profit from regulations that are preventing Derry from staging a professional boxing show at the moment.

The British Boxing Board’s stipulations mean that Derry is presently unable to host a show, as the city is too far away, time-wise, from the nearest neurological unit – at Belfast’ Royal Victoria Hospital.

Picture: Paul McCloskey sends Barry Morrison to the canvas during their 2008 bout at the Aura Leisure Centre.

Officials estimate that Derry is just eight minutes out and hopes are high that work to the A6 Drumahoe-Dungiven road will enable the dream to become a reality.

However, that project will take around four years to complete.

With that red tape likely to curtail any plans to bring pro boxing back to Derry – after a 36-year absence – Letterkenny could stand to benefit as an alternative.

This Friday night, Tyrone McCullagh fights Josh Kennedy for the WBO European super-bantamweight title on the ‘Danger At The Docks’ bill in Belfast. The card also sees the return of Creggan man Sean McGlinchey.

Galliagh’s Connor Coyle (8-0) recently had to shelve a planned ABF Continental America middleweight title bout that was planned for this weekend, but he remains on the rise.

Seamus Cunning of Derry City Boxing Promotions is aiming big and has set the Foyle Arena in Derry as his number 1 target to give Derry the show it craves. 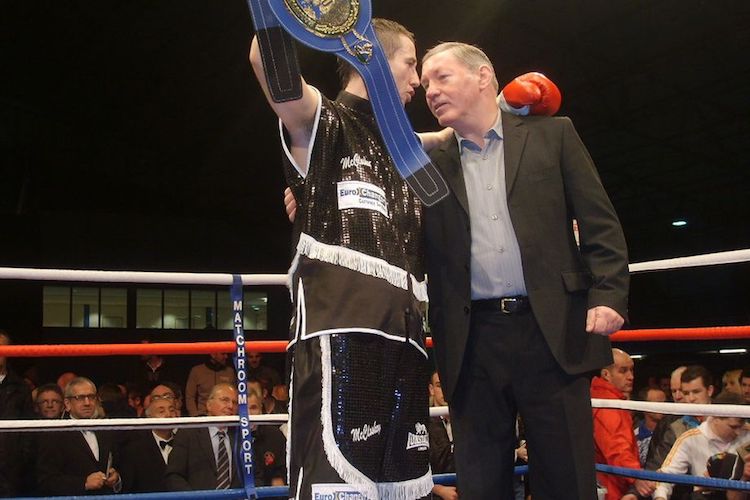 Paul McCloskey celebrates his win over Barry Morrison with the legendary Charlie Nash in Letterkenny in 2008.

Not since 1982, when Charlie Nash beat Frank McCord in a lightweight bout in the Guildhall has the Maiden City opened its doors to professional boxing.

“The end goal is to have a title fight in Derry at some stage in the future – I’m just mad to make that happen,” the 11-0 McCullagh says.

And the legendary Nash added: “People still remember me for things I did in boxing. I really enjoyed it and people still mention those flights. We need to get boxing back in Derry for the people and for the boxers.”

The Irish Boxing Board operates under different regulations and a return to Letterkenny is not out of the question.

The last show in Letterkenny was in October 2008 when Dungiven’s Paul McCloskey stopped Barry Morrison in the seventh round to claim the EBU European super-lightweight title at the Aura Leisure Centre,

In March ’08, McCloskey overcame Cezar Bazan at the Aura and he defeated Eugene Stan in February 2007 at the Clanree Hotel.