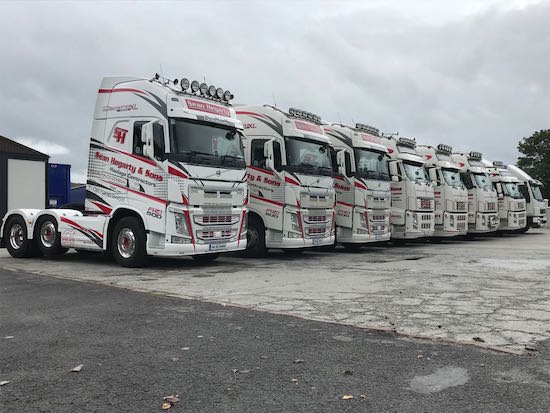 A Donegal haulage company have been shortlisted for a number of awards at the prestigious Fleet Transport Awards 2019, due to be held in Citywest Hotel, Dublin, on Thursday 11th October.

Sean Hegarty & Sons Haulage Ltd are a family owned company set up by Sean and May Hegarty with 1 truck in 1973, they are joined now in the company by sons John and Brian as well as daughter Claire.

The company is based at Woodtown, Ramelton.

The company operate general haulage services but the backbone is a next day groupage service between Dublin and Donegal that has operated through numerous recessions, the recent economic crash, good times and bad and continues to thrive.

The family are joined by a team of capable drivers and staff.

John Hegarty said he was delighted by the nominations.

He said “It’s a great recognition for mum and dad and the time they have put in, the service they have provided and the sacrifices they made to get us where we are today.”

He was quick to add “We would be nowhere were it not for the support of our loyal customers and the work of our dedicated staff so it’s a great recognition of that too”.

Claire Hegarty joined the family business as a van driver in 1996 and proceeded to driving rigid trucks and eventually artic trucks throughout Ireland.

Now a busy wife and mother of two, Claire runs the office and administration of the company daily as well as still getting behind the wheel when the need arises.

“Our business involves long hours and hard work”, said John, “It’s not a career many girls would have chosen but Claire set’s a pace most of us fella’s struggle to keep – We’re all delighted for her to be recognised on the shortlist and it would be great for her to bring the award back to Donegal!”

The Fleet Transport awards are an annual event run by Fleet Transport Magazine, Ireland’s largest transport magazine and the awards are supported by national and international bodies such as the Road Safety Authority, Freight Transport Association and various corporate sponsors.