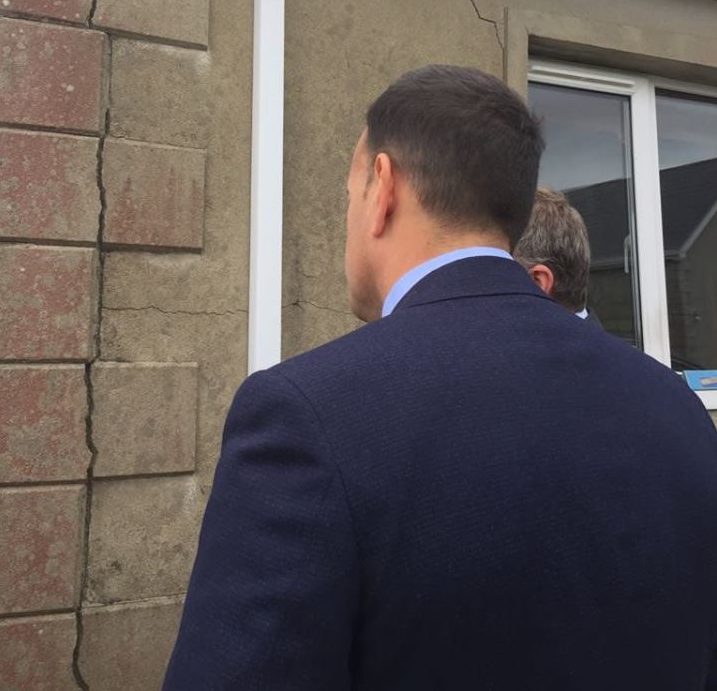 Minister Joe McHugh has announced that the Government has signed off on a scheme to assess and repair Mica affected homes in Co Donegal.

The Government Chief Whip was joined at a Cabinet meeting in Government Buildings in Dublin today by Minister for Housing, Planning and Local Government Eoghan Murphy who reported to ministerial colleagues on the potential scale of a programme to examine homes and to begin work.

“I have always been committed to this cause and I am delighted that we have now secured Cabinet approval for a scheme,” Mr McHugh said.

“In early September An Taoiseach Leo Varadkar stood in the kitchen of a Mica-affected family home near Buncrana and told them that a state-funded repair scheme was ‘only fair’.

“Today’s decision at Cabinet is living up to that commitment. Work will start immediately on the design of the scheme.

“It is an exceptional measure.

“This has been a long road for the many families living with this scandal and we hope now that this gives them some peace of mind and assurance that we are aiming to begin work early next year.”

Mr McHugh added: “I want to thank the family who opened their doors to An Taoiseach and myself about a month ago now and poured out their hearts over the impact the crisis has had on them.

“A special word must also go to Eileen Doherty and Ann Owens of the Mica Action Group, and other members who have shared their stories and opened their doors as they sought our support. The people affected by this scandal have shown immense patience, determination and fortitude in working with us to secure this resolution.”

Mr McHugh added: “It was a local Fine Gael councillor Bernard McGuinness who first brought this crisis to public attention. He sat up and took notice before others.

“I also want to acknowledge the support of Minister for Community and Rural Development Michael Ring as we raised this issue across Government.

“Senator Paudie Coffey was also instrumental in pursuing this. As minister in the Department of Housing, Planning and Local Government he set up the expert group to investigate Mica issues in Donegal and Mayo.”