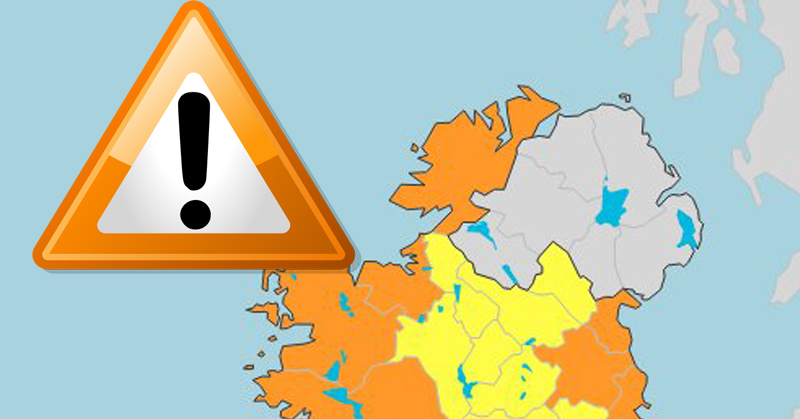 Severe alert extended as Storm Callum heads for the west

Met Éireann have extended the orange weather warning for Donegal and west coast counties over fears of a storm ‘backlash’ from Storm Callum.

The Status Orange alert has been extended to a severe wind warning lasting from 11pm on Thursday to 5pm on Friday.

Storm Callum is expected to batter the coastlines with wind gusts between 100 and 130km/h. These speeds could rise higher in some coastal areas and on high ground, according to Met Éireann.

Along with a spell of heavy rain and high tides, there is a risk of coastal flooding and damage.

Donegal County Council has estimated that peak winds will hit Donegal on midday Friday, and that Donegal Town and Killybegs could be worst susceptible to flooding. The Donegal Town Pier car park will be closed from 4pm Thursday. Sandbags are being delivered to locations liable to flooding.

Meteorologists Siobhán Ryan and Sandra Spillane said: “Further warnings being considered for later Friday across parts of the south and east, with the potential for another swathe of strong winds and heavy rain.

“This event is predominantly expected to be a coastal one, though the severe winds will extend to some inland parts.”

Fears that Storm Callum will continue to have an impact after Friday morning has led to weather warnings being extended.

Met Éireann Forecaster Deirdre Lowe told the Irish Sun: “Winds may take a while to clear across the country on Friday and the Orange wind warning could possibly be extended until 6pm in the northwest.

“It’s expected that peak winds will hit the northwest early on Friday morning, with gusts of up to 130km/h still expected to be the strongest of the storm.

“The storm should be around 200 miles off the west of the country by 6am Friday morning, but some backlash could be expected throughout the day.”

The Irish Coast Guard strongly advises the public to stay away from exposed beaches, cliffs and piers, harbour walls and promenades along the coast during storm conditions.

A statement from An Garda Siochana calls on drivers to take extreme care tonight and tomorrow:

“Please take extra care on the roads as there may be debris and possible flooding. Extreme caution should be exercised if driving near waterways.

“Avoid parking your car in areas which are likely to flood or where there is the possibility for debris to fall from nearby trees.”