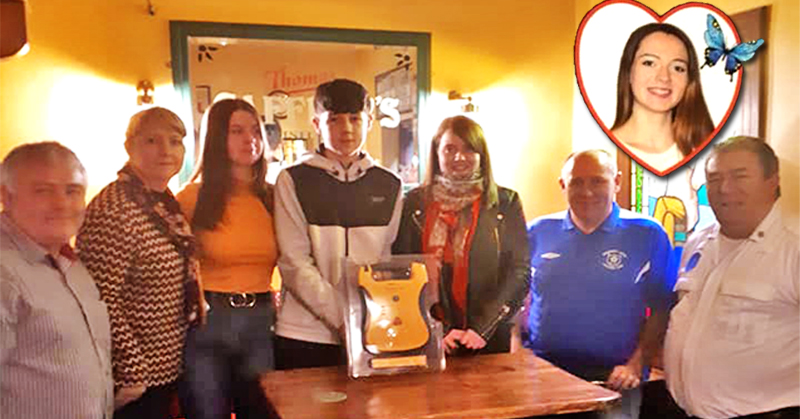 Defibrillator for Ballybofey United thanks to Kym’s Kolour Fun Run

The Harley family of Ballybofey have helped provide a vital defibrillator to Ballybofey United FC in memory of the late Kym Harley.

Kym Harley (19) died in a car crash in 2014. Since her tragic death, numerous fundraisers have been held in the Twin Towns in honour of the much-loved young woman.

The annual Kym’s Kolour Fun Run has been a huge success raising funds for local causes for the past two years.

This year, one such beneficiary was Ballybofey United FC.

The club was presented with an exterior defibrillator by the Harley family on Sunday, which was the 4th anniversary of Kym’s passing.

“We are delighted to be one of the beneficiaries this year and this is a fantastic and necessary addition to any sports club.

“It will be installed outside our new clubhouse when it’s completed and this will not only benefit our club but also the local community as the defibrillator will be made available to everyone and we will get out contact numbers when we get our coaches and other members trained up.

“This is a subject that has come up at many committee meetings and talks of fundraising were had but we never actually got to the stage where we could go out and buy one.

“So to Martin, Denise, Ryan, Natalie, Hannah, and not forgetting Gavyn who plays with our u14 team we thank you again and Kym’s legacy lives on through you all,” the statement said.