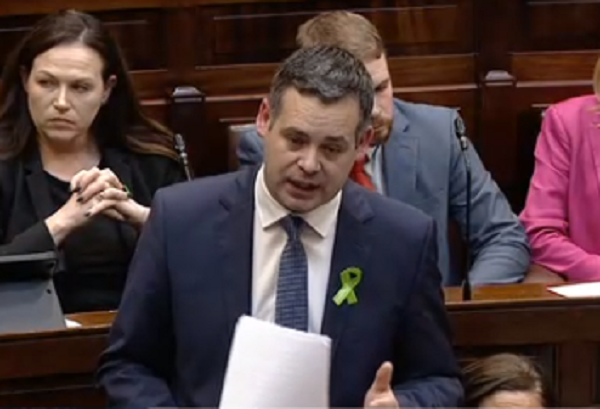 Deputy Pearse Doherty has slammed the failure of newly appointed Minister for Education Joe McHugh to show up for a Dáil debate to discuss the exclusion of a number of Donegal schools from the DEIS scheme, the Department’s flagship programme to support children who are at greatest risk of Educational disadvantage.

The Sinn Féin Deputy also expressed disappointed at the response provided from the Government bench in which it was confirmed today that no further schools will be added to the scheme until such time as further analysis is carried out on the identification model used as part of the programme.

Speaking in the Dáil chamber this afternoon, Deputy Doherty said “I placed this issue on the agenda for debate today because it’s one that is extremely important for schools in our county, Donegal and the new Minister for Education will be familiar with this issue.

“It was the first opportunity for the Minister for Education Joe McHugh, to address this House and I am disappointed that he hasn’t shown up.

“And I am more disappointed for the schools that we will make reference to in this debate given that he hasn’t shown up.”

Deputy Doherty said there are many challenges in Donegal in the education sector, amongst them include the Three Schools campus project, and the delay to new school building projects at Gaelscoil na gCeithre Maistrí in Donegal Town and St Mary’s, Stranorlar to name a few.

He added “And there are many other challenges such as the pay and conditions of the staff whom work within the school environment.

“However, today I want to revisit the issue which the Leas-Ceann Comhairle and I have raised previously and that is the issue of DEIS status which hasn’t been afforded to a number of schools in Donegal.

“Last year we raised this in respect four schools in particular, including Pobalscoil Ghaoth Dobhair, where I myself was a pupil a number of years ago, as well as Scoil Naisiúnta Ghort an Choirce, Scoil Naisiúnta Rann na Feirste and Scoil Mhín Tine Dé.”

He added that none of these four schools have been provided with DEIS status despite the fact that an additional 79 schools were added to the new scheme last year.

“Let me advise the Minister that if he was a pupil at Pobalscoil Ghaoth Dobhair, despite every single national school in the parish afforded DEIS status, when you advance to secondary school you no longer receive DEIS supports.

“The reason for that is because of the levels of educational attainment and professionalism of teachers and staff who’ve supported pupils to achieve their best.

“Therefore they are being punished because of their success in that regard.

“Notwithstanding this, the pupils that enter that school every day at 9am are coming from a disadvantaged area.

“In fact the 2016 Census shows that the area is even more disadvantaged than it was back in 2011.

“Gort a’Choirce hasn’t been awarded DEIS status despite the fact that when one goes to secondary school there, Pobalscoil Chloich Cheannfhaola, it does have disadvantaged status.

“The area of Gort a’Choirce is disadvantaged and according to the Deprivation Index score the levels of deprivation have dramatically increased since 2011.

“When we raised this issue last year, and when I raised it again this year, we were told by the Minister at that time that there was going to be a review to look at the updated census data and that this would be completed by the end of the first quarter of 2018.

“This data would show that those schools in those areas have become more disadvantaged than they were previously.

“Children are now back at school post September and there is still no supports in place for those attending schools in disadvantaged areas.

“These would include additional resources and supports, meal programs and additional teaching capacity to ensure that the challenges those schools face are addressed in a meaningful way.”

He said the question he wanted to ask the Minister, had Minister Joe McHugh the decency to turn up on behalf of these schools today and be present in the Chamber where he would have taken this opportunity to congratulate him personally on being elevated to the position of Minister for Education, for both himself and his family and indeed for the county.

“But that also must be followed up by the Minister actually turning up and delivering.

“The question I have is this: when is this blindly obvious decision going to be taken that the four schools I’ve mentioned will be awarded DEIS status, something to which they’re entitled.

“It is ridiculous that we’ve had to wait this long and that children aren’t being allowed to reach their full potential because of the red tape within the Department of Education,” concluded Deputy Doherty.