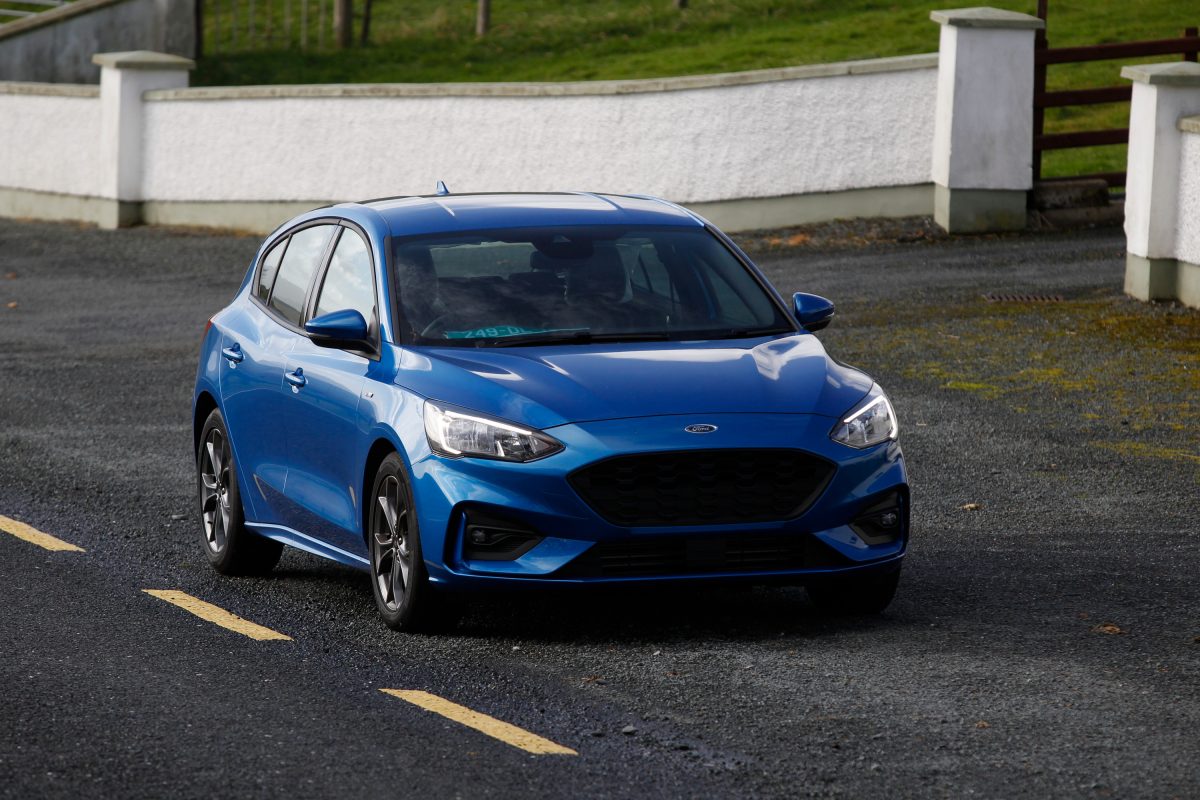 Straight out of the wrappers this week, Donegal Daily’s Motoring Columnist Brian McDaid gets the first drive in Co. Donegal of the new 2019 Ford Focus just weeks before the car goes officially on sale.

You know you’re in the right place by the approving looks that this car got as it passed them by this week.

Maybe it was the colour ‘Desert Island Blue’ that did it for them as they watched its glittering shape on a cold crisp October’s day.

One thing is for sure, this new Focus from Ford was hitting the right notes as we got nods of approval on our first private preview and drive of the all-new 2019 Ford Focus thanks to Hegarty’s in Letterkenny.

Ford is changing the menu with the introduction of this latest generation of the car to the range.

Its bigger than its predecessor as far as the wheelbase is concerned but also looks as if it sits lower on the road.

It only feels like yesterday since I road tested the first Ford Focus to come into the showrooms at Hegarty’s Auto Services in Ballymacool, that was 20 years ago. This week it feels like retracing my footsteps as I was offered one of the very first drives in the latest from Ford who has invested €660m into their factory in Germany which will make the 2019 model.

The first Focus was completely different from the car it replaced – the old Ford Escort. Triangles were a big part of the design of that new Ford back then, with a higher stance on the road than its predecessors. The tail lights where tucked high into the roof of the pillars of the boot lid.

The old Ford focus which has been with us for 20 years and will be replaced in 2019 wit the latest model.

This week as I collected the latest generation of the Ford Focus at Hegarty’s Ford dealership in Letterkenny at the Mountain Top, I couldn’t help but notice how this popular family car has evolved over twenty years.

Available in both diesel and petrol, right from the start of its launch, we were very interested in the Ecoboost one litre petrol version, which will be a big part of Ford’s new engine line up for the future as family cars get ready to move from diesel to petrol to meet emission demands of the future.

In the back of my mind, the sporty look of this new Focus in “ ST line” trim looked as if it could be “A Sheep in Wolf’s Clothing” with a three-cylinder engine of 999cc.

When you look a little deeper you will find out it develops 125bhp and 170 pounds of torque thanks to a turbo which spins into action very early and with little or no turbo lag you will soon realise this is a very potent power plant which punches well above the weight or capacity its size suggests.

With a unique “offbeat” sound to the three-cylinder engine, which is nearly 40kg lighter than the petrol engine it replaced on the older Focus. Then if you consider that Ford has developed the chassis on this new generation Ford from a more rigid steel its easy to see why this new Focus has a crisp and sharp feeling on the road.

Exclusive first pictures of the 2019 Ford Focus out on the roads of Donegal this week. Photo Brian McDaid.

Best of both worlds

The more you drive the new Focus the more you feel the willing of this small petrol engine to perform when it is pushed.

Our test for this was to see how it would pull heading into a constant hill. After “Copper” gave his nod of approval and wondered what it would be like with a tow bar, we headed off from McFadden ’s filling station in Breenagh, Glenswilly right to the top of Meenaroy mountain, all of which we did without a gear change down out of 6th gear.

We might have straight lined the two bridges a bit on the way up at the bottom of the hill but this 999cc petrol engine flew up the side of the mountain with ease.

Exclusive first pictures of the 2019 Ford Focus out on the roads of Donegal this week. Photo Brian McDaid.

The engine has the ability to turn from a turbo boosted power plant to one of the most efficient of its kind by running on only two of its three-cylinders when the car is driven efficiently, which gives the new Focus a very high miles per gallon return of between 55 and 65mpg, great news for this new petrol engine.

A very different looking 2019 Ford Focus on the road in Donegal in 2019. Photo Brian McDaid

This week we were in the “ST Line” trim level of the new Ford Focus, which has the sporting theme throughout. Also available with the ST-Line is the Vignale, Active, and Titanium.

Our Focus had red stitching throughout, a black honeycomb grille and a very sporting looking flat-bottom leather steering wheel.

We were very impressed with what Ford has to offer with this new 2019 Ford Focus in an ever-changing motoring world.

Ford has been with us for a long time and even when you were too young to drive, nearly everyone has a memory of road trips when a Ford was a part of that memory.

When I hear the intro of the Detroit Spinners “Working My Way Back To You”I ’m instantly transported back to 1980.

Easter Sunday night heading off after work to catch the Circuit Of Ireland Rally watching the Flying Finn and Scotsman Jimmy McRea battle it out in Co. Leitrim in a Rothmans Ford Escort RS 1800 and a Dealer Team Vauxhall Chevette HSR in the all-night rally stages.

Hundreds stood out on the top of ditches and the only light was that of their cigarettes lighting their faces as they waited on the gladiators to arrive.

Cibie Super Oscars Spotlight vibrating on the rally cars as they lit up the nights skies.

Our mode of transport to follow the rally was with our boss the late Andy Hegarty in his brand new Ford Cortina Mk5 2.0S, which two of us were lucky enough to go and watch the rally with. The all-new radio station at the time was RTE’s 2FM and they were pumping out the hits of the day on the standard Ford Radio in our Cortina included the hit by the Detroit Spinners, Working My Way Back To You.

The opening drum beats of that song bring me back to that generation of the Ford, like the Ford Escort and Cortina.

Forty years on and I’m writing about the next generation that Ford has to offer to its customers.

Maybe it’s just my mad taste in music that accidentally linked up the Spinners from Detroit and Ford, which also started life in Detroit 110 years ago in 1908 and the New Ford Focus which hits the street in 2019.