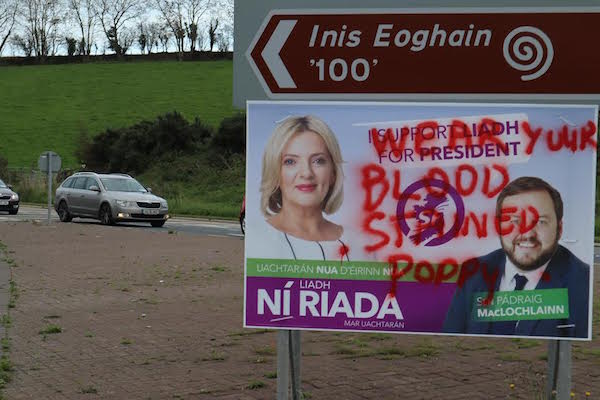 Sinn Fein has been forced to take down a large Presidential election poster of Liadh Ni Riada in Donegal after it was vandalised with offensive slogans.

The poster had been erected on the Manorcunningham Roundabout.

However, it was removed this afternoon after it was daubed with red paint and writing which said “Wear your blood stained poppy.’

The writing was in reference to Ms Ni Riada’s comment’s in which she said she would wear a red poppy if elected President of Ireland.

He told Donegal Daily “This happens in all elections that posters are attacked but I would obviously condemn it. It is disappointing but it happens.”

Senator Mac Lochlainn said that Ms Ni Riada was an intelligent woman who speaking if elected as the President of Ireland.

However, he added that he and many other Sinn Fein members would never wear a poppy.

“I have been to many First World War commemorations but I will never wear a poppy. The reason for this on a person level is that I believe the poppy represents all British soldiers in all conflicts.

“Liadh is her own person and she was speaking in a personal capacity with a view to representing the people of Ireland as President,” he said.