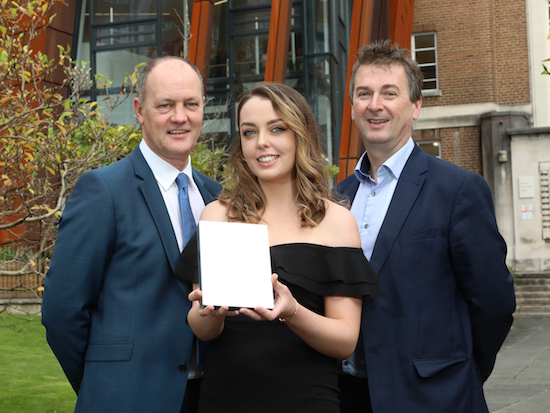 A Donegal student has won a major science award.

Eilish Bonner, from Dungloe, has claimed the first ‘Almac McKervey Award’ for Excellence in Organic Chemistry.

The award, a commemoration to the life and work of one of Ireland’s most distinguished scientists, Professor Tony McKervey, who passed away in June 2017, was made to the Queen’s University Belfast Medicinal Chemistry student.

Eilish was presented with the award by Dr Stephen Barr, Managing Director, Almac Sciences. She also received a £1,500 bursary towards her tuition fees and a 12 month placement with Almac to gain industry experience and mentorship.

Professor McKervey was an esteemed academic and an industry expert, having received the ASTRA Award of the Royal Dublin Society in 1986 and the Boyle-Higgins Gold Medal of the Institute of Chemistry of Ireland in 1993. He also authored over 270 published research papers in world-renowned journals.

Eilish commented: “I am delighted and honoured to accept this prestigious award – particularly in its first year. I have enjoyed my degree at Queen’s thus far and am excited to be gaining hands on experience during my placement at Almac and working alongside so many chemistry experts. Professor McKervey was such an inspiration to students and I am humbled to receive an award in his name.”

Dr Barr said: “We chose to name an award after our esteemed colleague and friend, Tony, as a fitting tribute to someone whose leadership, exemplary work ethic and kind demeanour inspired many of us during his long service with Almac. Tony was committed to supporting students with a shared passion for science and this award is designed to support outstanding achievement in organic chemistry, something that our panel of experts felt strongly was exemplified in Eilish’s dedication to her studies.”

Professor Mark Price, Pro-vice Chancellor for the Faculty of Engineering and Physical Sciences said “Queen’s is very proud of its long tradition of working with great companies, many like Almac, who employ outstanding QUB graduates from the sciences.

“It is lovely to see an outstanding student like Eilish be recognised for her achievements through the generosity of this award, given in the honour of one of our most renowned graduates in the sciences. The stars of the past are helping to shine a light on the stars of the future!”

Following the ceremony, Professor McKervey’s daughter, Henrietta, unveiled a perpetual commemorative wall plaque at the David Keir building at Queen’s University – a replica of which has been erected in Almac’s global headquarter facility in Craigavon.

The Almac McKervey Award, which is open to students studying Chemistry or Medicinal Chemistry at the School of Chemistry and Chemical Engineering, Queen’s University Belfast, will be presented each year to the top applicant, selected on both their academic achievement and performance at an interview with Almac’s chemistry experts.

It will be a mainly dry but...