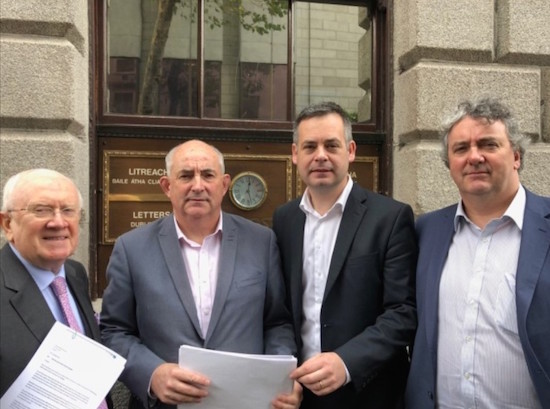 Donegal Deputies Pearse Doherty, Pat the Cope Gallagher and Thomas Pringle have this afternoon delivered submissions on behalf of the communities of Bun Beag and Bun na Leaca to An Post Senior Management in a bid to save the villages’ local post offices from closure.

The documents, which outline a number of arguments in favour of retaining the branches, were compiled in consultation with local community stakeholders.

The Donegal TDs presented the submissions to Public Affairs Manager with An Post, Angus Laverty earlier today at the company’s headquarters at the GPO along with a public petition signed by local residents demanding the retention of postal services.

Commenting outside the GPO earlier, the TDs said “As Public Representatives, we feel it is important that we made this journey to the GPO this afternoon to hand deliver these submissions on behalf of the communities in Bun Beag and Bun na Leaca in an effort to prevent the imminent closure of the villages’ local post offices.

“The publication some months ago by An Post of a list of 159 post offices which are set to close over the coming months, including 17 branches in Donegal, highlights the government’s complete antipathy for rural Ireland.

“Small rural communities have suffered the most from job losses and cuts to public services over the last number of years and the closure of the local post office is viewed by many as the death knell for these towns and villages should they proceed.”

The TDs added that over last few weeks, they have engaged with a number of communities where the local post office branch has been earmarked for closure.

They say there is a palpable sense of anger amongst residents, business owners and community groups, all expressing the belief that such a move will have a profound impact on the social and economic life of their areas.

They added “We too share those fears and we have been clear that it’s our firm believe that every effort must be made to retain postal services where possible because the services provided by the post office are often the lifeblood of community life.

“Today, we handed over submissions from the communities of Bun Beag and Bun na Leaca to An Post Public Affairs Manager, Angus Laverty at the company’s GPO head office as well as a public petition signed by local residents which demonstrate just how opposed both communities are to these planned closures.

“In the documents, a number of very strong arguments in favour of retaining postal services in Bun Beag and Bun na Leaca are outlined and why it is so important that local residents and businesses may continue to have access to them going forward.

“We want to thank both communities for their input in putting these submissions together and we pledge to continue to stand by them as part of this campaign to save their post office.”