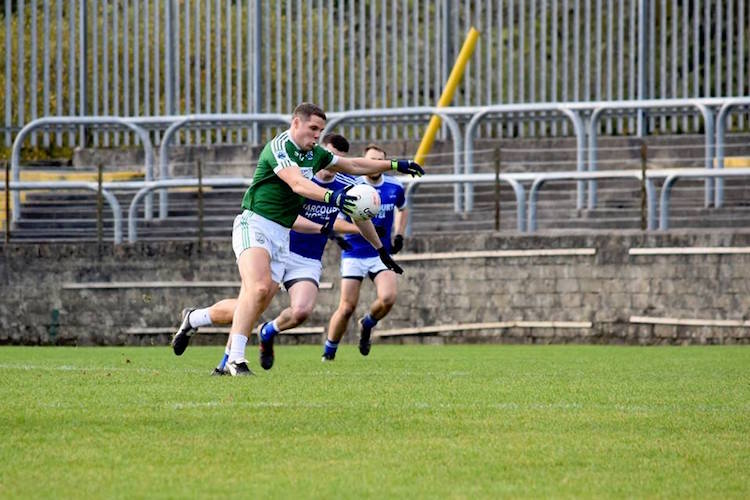 After 18 years as a senior footballer with Gaoth Dobhair, a 2-18 to 0-11 Championship defeat by Naomh Conaill in Glenties brought the curtain down.

The week beforehand, Gaoth Dobjair lost to Termon and it meant, ten years after they won their 14th Donegal SFC, it was another year of nothing.

For the third year in a row, Gaoth Dobhair had failed to qualify out of their group and Cassidy decided his time was up.

Gaoth Dobhair’s, too, was a long time away and felt equally far in the distance.

And yet, on Sunday evening, just 25 months since he – as he wrote in a column in Gaelic Life that week – ‘put the Puma Kings into my football bag for the last time’, Cassidy had helped Gaoth Dobhair back to the Promised Land after a 0-17 to 1-7 final win over Naomh Conaill.

“It’s amazing,” Cassidy said as he surveyed the green and white sea below him at Sean MacCumhaill Park.

“This is two years of hard work. We had a lot of dark nights and dark thoughts.

“We’ve always been our own worst enemies. Some of us went our own way, some didn’t buy into what we were doing and that derailed us.

“For the last two years, every man looked at each other in the eye and said, ‘If it doesn’t work for you and you’ve put everything in, that’s fine’. That’s all we asked for.”

Their rise had appeared inevitable but, for some, it was still scarcely believable.

That night in 2016, Cassidy – who had been player-manager himself in 2014 – called time and tweeted: “After 18yrs playing seniors the end has arrived unfortunately time passes too quickly!! #Gaothdobhair.”

In an interview with Áine Ní Churráin that week on RTÉ Raidio na Gaeltachta’s Barrscéalta programme, Cassidy reiterated his decision,.

“I’ve hung up the boots now and they won’t be coming out again,” he said.

The promise was there, as it always is around Magheragallon.

Cassidy could sense the potential even in that dark hour two years ago. .

“I felt that I had let down the parish, that the team let the parish down,” he said at the time.

“Maybe we have better players now (than in 2002/2006 when they were champions), but the dedication is not there, having your heart in the parish and the jersey … Back in 2002, if we lost a match, that would really hurt you, but would also drive you on.”

Conal Sheridan, an Omagh native whose cv was impressive having even involved in inter-county set-ups with Fermanagh, Tyrone, Derry and Cavan, had tried to work the magic, but like many before him couldn’t turn the water into wine.

Since Bonner guided them to glory in 2006, the likes of Sean ‘Nancy’ Gallagher, Declan Kelly, Cassidy with former Derry star Paddy Bradley, Tom ‘Beag’ Gillespie and Sheridan all tried their respective hands.

When Sheridan walked away after the 2016 campaign, Gaoth Dobhair turned to Mervyn O’Donnell. The appointment raised few eyebrows and the new man would’ve been known in few circles outside of Gaoth Dobhair.

O’Donnell found ‘a team that was downbeat and there was disarray…You could see the heads were hanging.’

“I didn’t have a lot of experience,” he said of his own elevation to the throne.

“I came from managing an under-12 team up to minor. The senior dressing room is a daunting place for anyone to be in. It really is. For the first while, you’re looking around at so many big characters, but they all got behind me from day one.’

O’Donnell’s sister, Rosaleen, is married to Cassidy’s brother, Stephen, who netted the winning goal in the ’06 final against St Eunan’s.

It wasn’t long before he tried to twist the former All-Star’s arm.

“Mervn took the job that nobody wanted,” Cassidy said.

“Nobody would touch us. He told me that you don’t retire – that football retires you.”

He thought about it and last June he was back in action, his return coming in a 0-16 to 2-9 win over Dungloe at Rosses Park in the League.

O’Donnell, after Sunday’s win in Ballybofey, mentioned the return of Christopher McFadden, ‘who was threatening to become Tiger Woods’, as being another key cog.

Gaoth Dobhair looked final-bound last year when they led Naomh Conaill in a semi-final, but they blew it and were left stewing over a long winter.

In February, Gaoth Dobhair gave another signal of what they could achieve with a 4-7 to 0-6 win over Lavey in the Ulster U21 final. Cian Mulligan’s hat-trick propelled them to glory.

In 2017, they had seven players – Carroll, Mulligan, the Ó Baoills, Kieran Gillespie, McBride and Friel – on the Ulster-winning Donegal U21 squad.

Potential alone has never won Championships, as the likes of St Michael’s could attest to.

Gaoth Dobhair still had to deliver.

The Championship draw and being paired in the group of death – alongside St Eunan’s, Naomh Conaill and Dungloe – was the ultimate test. Through it they came with flying colours before Bundoran and MacCumhaills  were dispatched en route to the final.

Friel now has the unique distinction of having captained Gaoth Dobhair to an Ulster U21 and Donegal SFC crown in the one year. And they embark into the Ulster senior campaign with their confidence brimming.

They meet Erin’s Own, Cargin, the Antrim champions, on Sunday-week in their opener and will have ideas of making inroads into the province.

Last year, they had Odhrán Mac Niallais just back from a summer in America when they met Naomh Conaill in the county semi-final. MacNiallais sparkled throughout the 2018 version and kicked eight points in an excellent final display.

“If Odhran turns up, there’s no-one in the county or the country that can live with him,” was Eamon McGee’s verdict.

Gillespie had been injured last year, but was back with a vengeance this year and had a superb campaign.

The fruits of a resurgence at underage level, that was kick-started back in 2005, is blooming now and Gaoth Dobhair have given themselves a real platform to build.

They’re both aware and proud of their history in Gaoth Dobhair. That history means, as Cassidy once said, they’re always ‘standing on the shoulders of giants’, but now they have new heroes.

As Cassidy and co meandered around Bloody Foreland on Sunday evening, the cavalcade stretching what must have felt like the perimeter of the parish, he was surely glad of being coaxed back.

And he’s been around long enough to realise what Sunday’s win could mean.

“It’s about getting these lads the first win…the world is their oyster now,” Cassidy said.

That old Gaoth Dobhair trait – ‘we would’ve died for each other out there’ – is back with them and the journey, in more ways than one, might only be starting.

The world’s their oyster again as Kevin Cassidy and Gaoth Dobhair break through the darkness was last modified: October 24th, 2018 by Chris McNulty