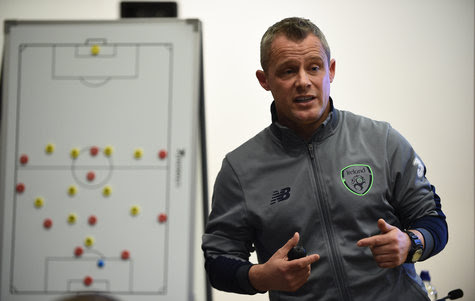 Republic of Ireland Under-15 Head Coach Jason Donohue has selected an 18-man squad for two International Friendlies away to Poland next month – including Finn Harps double Luke McGlynn and Conor Campbell.

The matches are the first of the season for Donohue’s side, and the squad meet this weekend for a three-day training camp in Co. Meath.

More than half of the squad is made up of players from SSE Airtricity Under-15 National League sides, and Donohue is looking forward to the training camp with a new batch of players.

“After a very extensive player identification process we selected a very balanced squad of 18. This is their first taste of international football and the demands attached,” Donohue revealed.

“It’s very early in the season and we operate a revolving door policy as players are developing at different rates.

“Last year, 30 players got an opportunity to test themselves against opposition so it’s a great incentive for players who missed out this time to work hard again and take the next opportunity when presented to them”, he continued.

“There was some very tight calls as quality of play in the assessment games was very high. We must note the good work done at the players’ clubs.”

Full 18-man squad below: Republic of Ireland Under-15 Squad