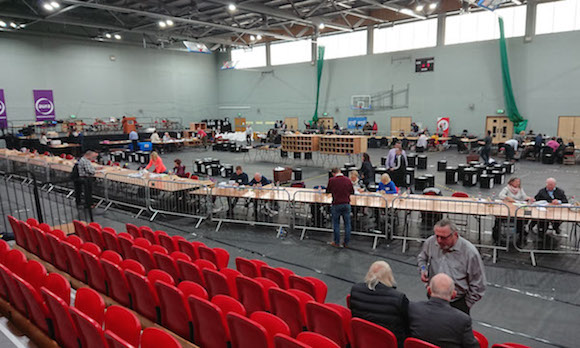 Apathy is the winner of the Presidential race in Donegal

Apathy is the order of the day for the Presidential election in Co Donegal.

With a turn-out of between 38 and 40%, there are little if any spectators at the Aura Leisure Centre in Letterkenny where the counting is now taking place.

The issue at this count centre is the lack of tallying wiht the only party represented is Sinn Fein.

Despite that just 20% of the overall vote is being tallied.

A Sinn Fein spokesman said they had applied to have more tickets to tally at the centre but were turned down.

“We could have tallied the entire count but we were not allowed to have enough people at the centre,” he said.

Of those votes Michael D Higgins is leading the race but Peter Casey is a close second.

Of the other contestants, Liada Ní Riada is on 10%, Sean Gallagher is at 8%, Joan Freeman is at 7% and Gavin Duffy 1.7% but that tally is a limited tally.

Among the interested spectators, who were few and far between here this morning, was Minister for Education Joe McHugh, Deputy Pearse Doherty and Deputy Pat the Cope Gallagher.

Apathy is the winner of the Presidential race in Donegal was last modified: October 30th, 2018 by Stephen Maguire
Facebook0Tweet0LinkedIn0Print0